Like other Realtors, Kevin Fertig is dealing with the challenges of guiding clients through a hot real estate market.

Unlike his peers, however, Fertig once walked, with entrance music blaring, toward center stage at Detroit’s Ford Field to compete in Wrestlemania 23 as more than 80,000 people cheered and jeered him on.

“There’s no cooler feeling in the world knowing that all eyes are on you,” Fertig, 44, said of that walk out. “Unless you’ve ever done it, you’ll never understand it. It’s electrifying.”

Fertig, recognized in wrestling circles by the persona of vampire “Kevin Thorn,” wrestled in every U.S. state except Alaska and in most major venues overseas. Locally, he competed in Bankers Life Fieldhouse so many times that he knows the tunnels underneath the bleachers like the back of his hand.

But for the last 3 1/2 years, Fertig, a Fishers resident for approximately 18 years, has been selling real estate. He works for RE/MAX, 5645 Castle Creek Pkwy N. Dr., in Indianapolis.

“I love to see what kind of smiles I can put on people’s faces,” Fertig said. “You’re helping someone accomplish something that they might have never thought they could — buying a home. Or you’re showing someone how much their investment is paying off if they are selling their home.”

Fertig, who no longer wrestles professionally ( he left the WWE in 2009 but occasionally dons an old persona for a match) had been working at a bar in Noblesville but was looking for a career change. He never had trouble landing job interviews but was often told — after discussing his wrestling career — that his lack of college experience left him ineligible for the position. He had begun wrestling shortly after high school.

But Fertig, a husband and father of a 13-year-old son and 10-year-old daughter, discovered working in real estate was different. He learned if he could work hard and study, he could earn a license and begin a career as a Realtor. The opportunity to succeed on his own merits appealed to him.

“Real estate is a sink or swim thing, and that’s what I’ve always done the best at in my life,” he said.

‘No sense to stop now’

Fertig became interested in professional wrestling as a boy in Memphis, Tenn., by watching the wrestling TV program “USWA” at 10 a.m. every Saturday.

“It was a big deal back then,” Fertig said. “So many people would come through there, The Rock, (Hulk) Hogan, Ric Flair, Jerry Lawler. Everybody has been through Memphis.”

Wrestling was not allowed in his home by his minister father, but Fertig would find ways to sneak peaks as much as he could. Eventually, Fertig, who played football and threw the shot put in high school, worked out in the same gym as professional wrestler Sid Vicious, who invited Fertig to become a workout partner.

“I kept telling myself if I kept working out and progressing in this then there is no sense to stop now,” Fertig said. 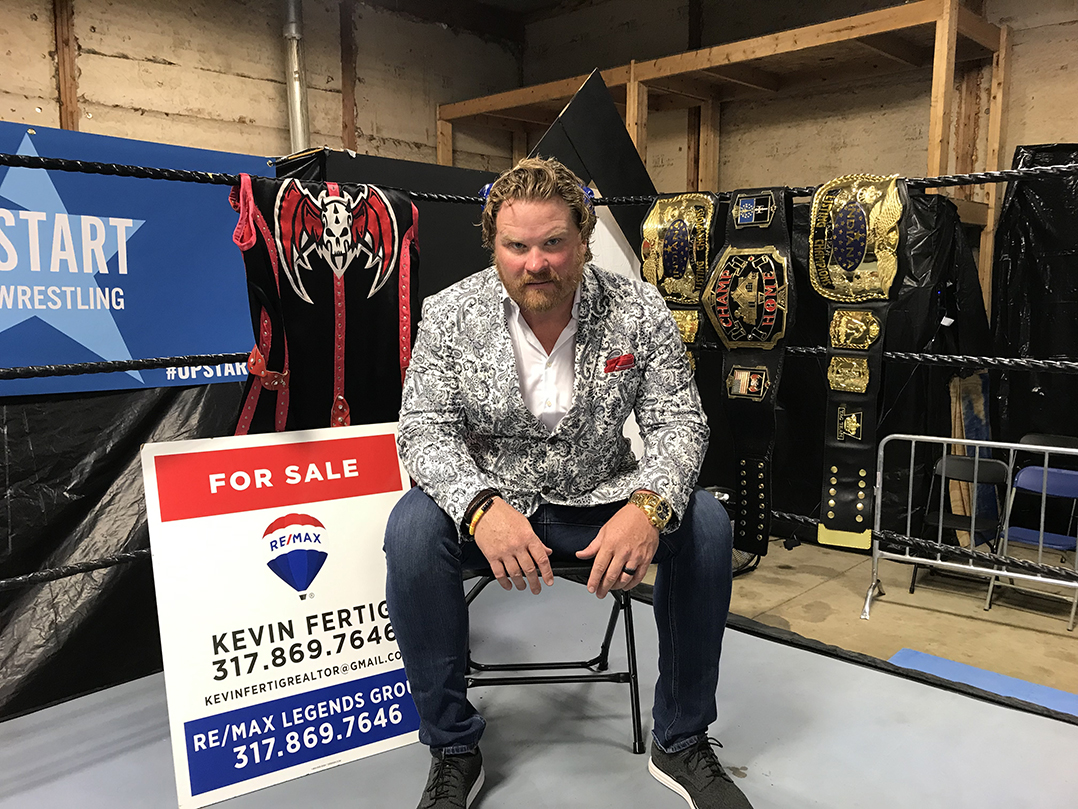 Former WWE wrestler Kevin Fertig incorporates his wrestling past in his current career as a realtor. He had a special championship belt made for his customers to wear once they close a deal. (Photo by Jonathan Matthes)

Loving to be hated

During his days wrestling, Fertig knew that fans didn’t watch to discover the outcome of the event but for the entertainment value. And he knew he played a key role in that experience. Most of the time, Fertig played the heel, whose job is to make the possible defeat of the babyface — the protagonist — seem real.

“My job was to antagonize the crowd, get the crowd to hate me and then make sure the babyface was the (star),” Fertig said.

Fertig would outclass the babyface, or face, have him beaten, then, miraculously, the face would rally to victory. Fertig would lay catatonically on the mat and the referee would dramatically count him out. The crowd would roar. The face would bask in the glow of victory, and Fertig would smile.

“I’d be laying there on the mat, and even though I didn’t win, to hear how crazed the crowd got for the match was just as exciting to me as it was getting praise,” he said. “I knew I was a part of their excitement.”

Smiling was not uncommon for Fertig’s foes. Behind the bloviations and threats, most of the men on the tour were friendly with each other and enjoyed the theatrics of the occasion.

Once, Fertig, as Kevin Thorn, was wrestling Kane. When Kane – whose real name is Glenn Jacobs and is the Mayor of Knox County in Tennessee – threw a punch that was too real, striking Fertig at full force and knocking him to the mat. Fertig looked up in surprise at Kane, who was giggling. Microphones were too far away to pick it up and no one in attendance could tell he was laughing because Kane wore a mask. Fertig, however, could hear him and couldn’t help but crack a smile, too.

The smiles and the enjoyment are all aspects that Fertig sees as a connection from his past in professional wrestling to his full-time job in real estate.

“I have this (motto,) ‘The Champ is home.’ It’s not about me becoming the champ, it’s about the buyer becoming the champion,” Fertig said. “I’m doing my part to make sure that (the buyer) is the main event in your own home. I’m going to work my tail off so that on closing day it’s all about the buyer getting their home. And at the end of the day, they are leaving with the biggest smile on their face.”

Kevin Thorn was not Kevin Fertig’s first alter ego as a professional wrestler. He wrestled as Mordecai in the WWE and had several others before that. Picking a persona can be a delicate dance between the marketing departments of the entertainment ownership group and the performers.

Networks and organizations, like the WWE, need marketable characters. They might tweak versions the performers come up with to meet their aims.

It’s what happened to Fertig’s Mordecai. Fertig came up with the character under the name Malachi, but he said the WWE changed the name to Mordecai, which allowed the organization to have more say over how the character was used.

Then the television network Syfy wanted to bring back the Extreme Championship Wrestling, or ECW, brand and wanted a vampire character, which Fertig thought he could play. He suggested the name “Thorn” after the German shepherd in the movie “The Lost Boys.” In vogue at the time were full names, so “Thorn” became “Kevin Thorn” and Fertig was back in the ring.