You are at:Home»Current in Carmel»Carmel Community»Carmel, VW tracking traffic with eye on future public transit options 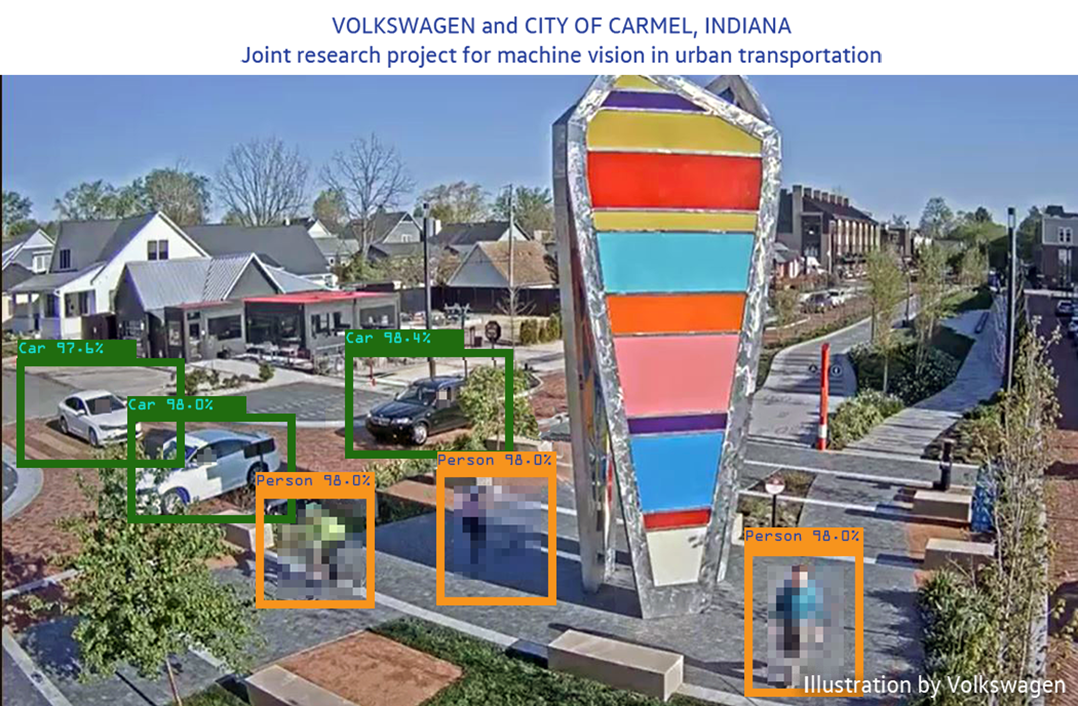 Volkswagen is using its machine-vision software to track information about vehicle and pedestrian traffic in Carmel. (Photo submitted by City of Carmel)

The City of Carmel is partnering with Volkswagen Group of America to gather detailed data on pedestrian and vehicle traffic trends and expects to use the findings to determine the future of public transportation in the city.

Volkswagen is using its machine-vision software to monitor more than 300 of the city’s existing cameras, primarily in its busiest areas. The technology analyzes traffic patterns of vehicles, bicycles, pedestrians and monitors parking spot utilization in much greater detail than a traditional traffic counter.

In the near term, the city expects to use the data to help with traffic flow before and after major events and provide information for emergency responders. Ultimately, Carmel Mayor Jim Brainard expects city planners to glean enough information to know whether the city should pursue devising a public transportation system.

“The old way to do it would be to simply watch, put a bus line down a busy street and put some stops up where we think people are going,” Brainard said. “Sometimes, they get it right. Most of the time, they get it wrong and have to adjust the stops and waste a lot of money.”

Brainard said the city is open to considering various types of public transportation as well as the possibility that the data may show that it’s not a good option in Carmel.

“Good data is absolutely vital in not making expensive mistakes,” he said.

Carmel is the first city to enter this type of partnership with Volkswagen, which initially implemented the technology to optimize production at its automotive factories. In April, the city’s Board of Public Works authorized a $150,000 contract with Volkswagen to provide the service.

The Volkswagen software protects the privacy of those captured on camera by pixelating faces and license plates and storing only count totals, not images. It delivers the data to the city through a dashboard that highlights key findings.

Volkswagen is in discussions with other municipalities to use the technology elsewhere.

“The future of transportation will require more data connections and sophisticated analysis than ever before,” stated Johan de Nysschen, chief operating officer at Volkswagen Group of America, in a press release. “We see our tool as an opportunity to provide cities with more usable data on mobility to help shape their future transportation needs, from pedestrians and vehicle drivers through public transit.”