The 2021 Carmel Film Forum: Documentary Filmmaking Workshops and Festival will be presented virtually for free, utilizing the Carmel Clay Public Library’s Zoom account. It will be conducted on the Saturdays of July 10, 17 and 24. Each workshop is scheduled from 2 to 4 p.m. 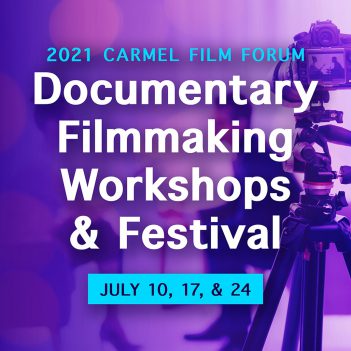 The filmmaking workshops will discuss how to write a compelling personal two-minute documentary film and demonstrate the technology needed for videoing and editing a documentary. The webinar will be facilitated by James Moriarty, co-owner and producer of Moriarty Media and Sara O’Sha, audiovisual services supervisor of the Carmel Clay Public Library. Moriarty will teach the technical aspects of filmmaking, host the film screenings and introduce special guests who will contribute their filmmaking and film festival judging expertise.

July 10 — Session 1: How to write a two-minute documentary film and who is going to see it?

July 17 — Session 2: How to shoot my two-minute documentary on a smartphone and edit it on a computer. Featuring special guests Imoto Harney, producer and director of photography from Captain Crazy Productions; Kristy Thompson, Carmel Clay public senior digital media lab specialist; and Nathan Bechtold, president of the Indiana Filmmakers Network.

Participants can register at carmelclaylibrary.org/events. A webinar link will be emailed to the participant, along with a program/curriculum, list of the tools, software and supplies needed for the workshop. Seats for the webinar are free but limited. For more, visit MoriartyMedia.com.