You are at:Home»Current in Carmel»Carmel Community»Carmel author to release first book in trilogy for young adults

Alyssa Roat juggles duties as editor, publicist and writer. She maintains focus by keeping plenty of lists and calendars.

“Growing up, I was home-schooled in junior and senior high, so I learned early how to manage multiple jobs, in this case, classes, during the school day, prioritizing tasks,” said Roat, who has written for newspapers, magazines and online sites. “In college, I worked multiple internships and jobs as a full-time student, so when it came to adult life, I enjoyed staying busy with diverse activities rather than a traditional 9-to-5 (job). I like to keep my mind active and challenged. However, sometimes choices have to be made.” 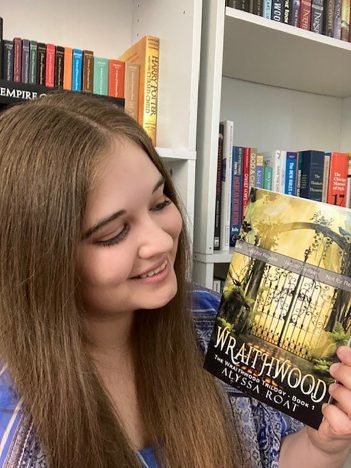 Roat stepped down from her role as associate literary agent in March to focus more time on her novels. The 22-year-old Carmel resident’s novel, “Wraithwood,” is a young adult contemporary fantasy full of magic, myth, mansions and mazes. The book, which will be released July 15 by Mountain Brook Ink, is the first in “The Wraithwood Trilogy,” and Book 2 is scheduled to come out April 2022. Roat wrote the first draft of ‘Wraithwood” as a junior and senior in high school in Tucson, Ariz.

“At the time, I wanted to write a whimsical book for kids about a quirky magical mansion,” she said. “But the story got away from me and kept running until I had a much more complex story for teens that was too much to fit in one book. Thus, a young adult fantasy trilogy was born. I had to do a lot of editing as it went through the process of becoming represented by an agent and securing a publishing contract. The finished product is something I love but isn’t what I started out to write at all. One thing did stay the same, however. I wanted a quieter, more bookish female protagonist that spoke to teens like me. I never felt like a bold fantasy protagonist, but I was endlessly curious. I think this led to the magical mystery feel of this book.”

Roat, who attended Taylor University in Upland, Ind., and moved to Carmel after graduation, stays busy despite being diagnosed with dysautonomia, a nervous system disorder. Symptoms began during her sophomore year of college.

“Most noticeably, I started fainting multiple times a day, and no one really knew what was wrong,” Roat said. “It just got worse as the months progressed. I was tested for everything from diabetes to seizures before I was finally diagnosed with POTS (postural ortostatic tachycardia syndrome) that summer through a tilt table test. Basically, in dysautonomia, the autonomic nervous system doesn’t work right. For me, those things that the body is supposed to do automatically, it often just doesn’t. No one really knows why people get it, and there isn’t a cure, but it can be managed with medication and lifestyle modifications. As part of my platform as an author, I’m passionate about spreading awareness. It often goes undiagnosed or misdiagnosed, and it can take years to get a correct diagnosis. I got lucky that it only took about six months.”