You are at:Home»Current in Westfield»Westfield Cover Stories»Round and round: City explains why it takes so long to build federally funded roundabouts

When Westfield resident Rob Vorsilak first saw a sign indicating a roundabout would soon be constructed at the intersection of 161st Street and Union streets, he was excited. However, after several years of seeing the same sign and no roundabout, he began to question the city’s process.

Vorsilak said he’s seen the sign for about two years, and he figured construction had been delayed because of the COVID-19 pandemic.

“I go through this intersection daily, and then of course, the pandemic hit, so last year I was like maybe they’re putting things on hold,” Vorsilak said. “I feel like with this there’s no communication.”

Vorsilak said he hasn’t had a bad experience at the intersection with the stoplights, but it’s still frustrating to see the sign each day with no progress.

“You’re sitting at a red light looking at this (sign) and thinking, ‘Oh, great, a roundabout is coming soon,’ but two years later and you’re still staring at it,” he said.

Vorsilak, who has a background in urban planning, said it’s difficult for him to find information about certain projects in the City of Westfield.

“With my background, I know where to look for certain information, like new developments that are happening, and it’s hard for me to find these things,” Vorsilak said.

Vorsilak said he does appreciate the “What’s Happening Here?” posters with a QR code the city installs in areas going through the plan commission, but he said he wishes that information, and the information about roundabout-coming-soon signs, would stay on the city’s website for easy access.

The City of Westfield emails a weekly Travel Westfield newsletter with construction projects, but it only contains current projects. City engineer John Nail said when the city applies for federal funding through the Indianapolis Metropolitan Planning Organization, there’s a delay between when the funds are approved and when they can be used. The city installs the roundabout-coming-soon sign as soon as the funds are approved, but they may not be able to access those funds for up to four or five years.

“Roundabout-coming-soon signs are something we started putting up about four to five years ago, specifically when we received federal funding for our projects,” Nail said. “We wanted to let the community know we understand this intersection is a problem and we have a plan in place to fix that issue. Part of the frustration of seeing that sign for four years is related to the funding source itself.”

“(The IMPO receives) $50 million a year from the Federal Highway Administration, and they are responsible to give that money to counties and cities in the greater Indianapolis area,” Nail said. “We compete with other communities like Noblesville and Carmel for that funding every year.”

Nail said the reason it can take up to five years to construct a roundabout when the city receives federal funds is because of the National Environmental Protection Act.

“The NEPA says if we are using federal dollars to do a road project, we have to follow several steps under national law, and the Federal Highway Association has to review all the documentation we produced,” Nail said. “It’s frustrating on our end, too. We would love to build it faster. There’s just some red tape and documentation related to getting the federal dollars.”

Typically, federal funding through the IMPO covers 80 percent of the city’s approved projects.

“The Westfield taxpayer only pays for 20 percent, so it’s a good deal for our residents, but the trade-off is, it does take a little longer,” Nail said.

A roundabout also is under construction at 171st Street and Carey Road, but that project is funded locally.

The City of Westfield will apply for more federal funds through the IMPO this year, and those funds will be available for use in 2025. 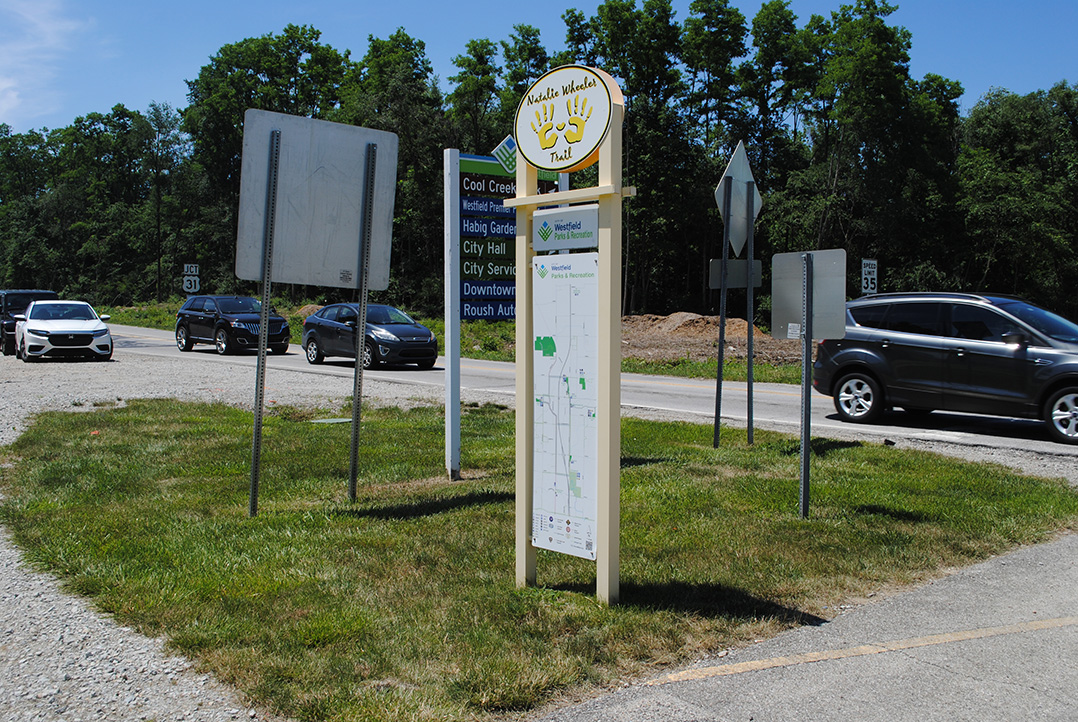 Rob Vorsilak said he has seen the roundabout-coming-soon sign at the 161st Street and Union Street intersection for several years and has seen no communication from the city about when it would be constructed. (Photos by Anna Skinner)

Westfield resident Rob Vorsilak said it’s not just the roundabout-coming-soon sign at the 161st Street and Union Street intersection that’s frustrating. It’s also the fact that the sign is clustered with several others at the southwest quadrant of the intersection and makes it difficult to see if a car is coming when a northbound driver is turning right when the light is red.

“There’s this wall of signs heading north on Union,” he said.

The roundabout-coming-soon sign is joined by a parks sign, a pedestrian crossing sign and others. A spokesperson from the City of Westfield said the sign will be removed in six weeks when construction begins.