The COVID-19 pandemic led to increases of many kinds, including the amount of alcohol consumed, time spent with family and, unfortunately, the number of deaths associated with domestic violence.

In Hamilton County in 2020, there were eight deaths associated with domestic violence compared to none the previous year, according to Prevail Executive Director Susan Ferguson.

The statistic prompted the Hamilton County Council to approve $14,000 for design of a domestic violence shelter, an idea that’s been discussed — but not funded — for more than 20 years. RQAW, a Fishers engineering and architectural firm, is designing the project. Prevail is based in Noblesville, where it provides support services to victims of domestic violence.

“This is something that’s been talked about for a really long time that’s coming to the forefront now for lots of reasons,” Ferguson said. “As the county grows, housing issues have certainly become glaringly obvious during COVID, and domestic violence has been a bigger issue in the past year or so.”

In the past year, Ferguson created a housing-solutions plan designed for people fleeing a domestic violence situation. One of the aspects Ferguson is looking to implement is to provide continuous housing for different stages in a victim’s escape. Currently, Prevail funds a hotel stay for the victims or sends them to domestic violence shelters in Marion or Madison counties.

“One of the arguments around a shelter in Hamilton County is if we do a temporary shelter – 30, 60, or 90 days – what does somebody do then? What’s the next step? If there’s not attainable housing in Hamilton County, and if they have to move out of the county, anyway, does it make sense to move people to a shelter in another county?” Ferguson said. “We wanted to look at the whole spectrum and not just an emergency shelter option.”

Ferguson said she’s not sure how long the design phase will last, but she wants to have the shelter up and running in two years.

“That’s a lofty goal, but the plan is to design something where we could be co-located with Prevail’s current services and the residential side, even long-term housing,” she said.

Ferguson envisions the campus with six units that serve as an extended-stay hotel for victims fleeing a domestic violence situation.

“It would be an apartment with a living room, kitchen, bathroom and sleeping arrangements in each unit, so it’s not communal,” Ferguson said.

Prevail would keep several units open for emergency use. Currently, Prevail sometimes places a victim in a hotel when that’s a safe option. The organization also sends some victims to Alternatives, an Anderson-based organization offering services to victims of domestic violence.

Concurrently with the design phase, Ferguson said she expects Prevail will ask the community for monetary support through fundraising. Hamilton County Council member Fred Glynn said the council plans to continue to aid in funding the shelter.

Glynn said the county is trying to secure land at Riverview Hospital to build the shelter. If the shelter is built on hospital property, Glynn estimates the project to cost between $3 million and $5 million. If the hospital land is used, Glynn said the build-out will be much faster.

“This is always something we’ve looked at, but we would go look for land and then it would die off,” Glynn said. “This year, I was the liaison for Prevail and I wanted to keep pushing it along, and if we keep pushing it along it’ll get done. I think this is long overdue. There’s no need for a county of our size and our affluency to send people to Madison or Marion county. This is something we can all agree needs to get done.”

RQAW plans to incorporate biophilic design into the shelter, meaning it would be constructed to maximize connectivity to nature for occupants. Ferguson said a biophilic design will be used because of nature’s healing properties.

“There is no perfect location,” Ferguson said. “I know that we will want to be close to services, trails, job opportunities, child care, those kinds of things, so you can imagine what would be ideal to be located nearby. There are also security concerns. It would be great if the location was regularly patrolled by law enforcement.”

Ferguson said an example of a prime location could be the grounds of a hospital. 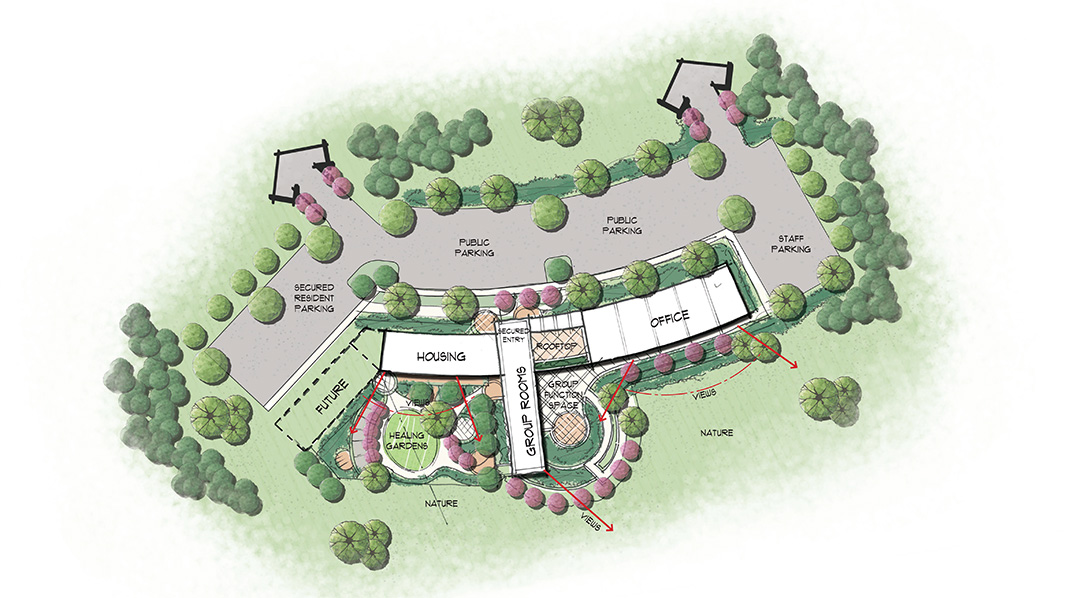