The Town of Zionsville and the Hamilton County Airport Authority/Indianapolis Executive Airport recently released a report outlining plans for a jointly commissioned Strategic Future Land Use Plan for the area surrounding the airport.

Because of the town’s growing population, town and airport officials saw a need to create a land-use plan to help prevent conflicts. 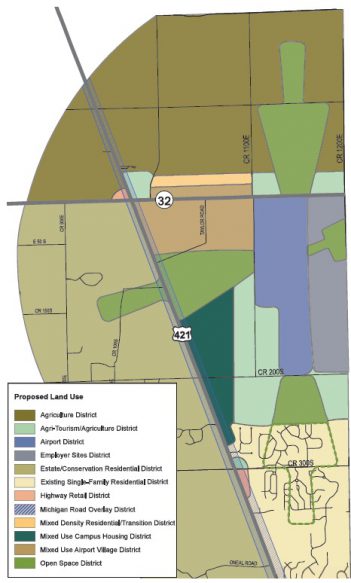 HWC Engineering Director of Planning Cory Whitesell, the plan’s project manager, said during a June 4 virtual presentation that the town and the airport authority want to “find a balance of protecting the use and integrity of the executive airport and meeting the Town of Zionsville’s community and economic development goals.”

“The way that has been done has been striving to find what is an appropriate mix of compatible development that can occur around the airport,” Whitesell said.

The plan is intended to build off land use policies in Zionsville’s Comprehensive Plan and provide specific guidance for land-use decisions in areas surrounding the airport by supporting long-term development that meets Zionsville’s goals while sustaining the airport as “an economic engine for Zionsville and surrounding areas.” The airport annually contributes approximately $430 million to the local economy, according to a 2012 Indiana airports economic impact study.

The airport operates with a single concrete runway in a north-south orientation. The runway is 5,501 feet long by 100 feet wide. As part of the 2008 Master Plan, a 1,500-foot extension to the runway is planned to the south end of the runway, to make it 7,001 feet long. The 2008 Master Plan also envisioned a future second runway expansion from 7,001 to 7,700 feet, which is the ultimate planned runway length. The runway extension would provide an increased margin of safety for takeoffs and landings.

The 2008 airport master plan includes proposals for a crosswind runway, which would cross the airport’s existing runway, forming a cross shape. No action is being considered at this time for either the crosswind runway or the second phase runway expansion project, according to town documents, and each would be subject to FAA approval, environmental clearance, justification, funding and future public participation or local approvals before proceeding.

The first phase of the runway extension project is under construction, and some development has already occurred in areas close to the airport, leading some residents from the Brookhaven and Fieldstone neighborhoods, which are located south of the airport, to voice concerns about noise and aircraft flying low over their homes. During public meetings, they have said the runway extension could make the issues more significant.

But planners say the airport has no short- or long-term plans to allow larger aircraft than business jets on a regular basis or to start commercial passenger service. They say the Federal Aviation Administration will support neither.

During public meetings, residents in existing overflight areas recommended against further development of similar areas, although areas south of the existing runway are zoned to allow residential development. The zoning decisions were made by Boone County officials prior to the area being incorporated into the Town of Zionsville’s jurisdiction, according to the report. The FAA has informed the airport that areas between C.R. 200 S. and the Brookhaven/Fieldstone neighborhoods should be protected from development.

In the medium- to long-term, planners have identified the U.S. 421 and Ind. 32 intersection as the most likely area for commercial growth. The Ind. 32 corridor is envisioned to be the primary east/west corridor through the study area and could develop into a critical regional transportation corridor, according to the report.

Planners say the development strategy for the commercial zone will create an “Airport Village.”

“The district is envisioned as a vibrant mixed-use district that will attract new businesses and professionals to the area,” the report stated. “It will consist of a traditional mixed-use urban center with two and three-story office, retail, commercial and upper floor residential areas. Airport-related businesses will be encouraged, but (they) should serve both the aviation industry and community at-large.”

“This is going to be the same scale and intensity as The Village, but with a little bit of a modern twist to it that would occur near the airport,” Whitesell said.