Shortly after moving to Carmel, Steve Krusie was pressed into community service for CarmelFest.

Krusie, who owns for Strategic Marketing & Communication Solutions, and his wife, Kathleen, moved to Carmel in 2015 when she joined Community Health Network. 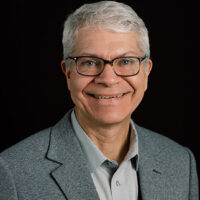 “We’re originally from eastern Iowa, and that probably makes us Midwesterners at heart,” said Krusie, who is the 2021 CarmelFest chair for the July 4-5 festival. “I joined the Carmel Rotary Club almost immediately upon arrival and felt warmly welcomed by my new friends and neighbors. Shortly after officially joining the Carmel Rotary Club, I was recruited to co-chair the CarmelFest Entertainment committee with Dan Kramer, which we did for a couple years.”

In 2019, he served as the CarmelFest parade volunteer recruiter. Krusie said CarmelFest executive team leaders Jeff Worrell and Gary Sexton recruited him to be chair in February 2020.

“The idea was to apprentice under James Bednarski, who was in his final year of chairing the Independence Day festival,” Krusie said. “Of course, the coronavirus pandemic flipped all of our plans and forced us to cancel the on-site events. Thankfully, Carmel city leaders in collaboration with the Carmel Rotary Club developed a clever and safe way for residents to experience fireworks over three locations of our city last year. Our goal for this year’s festival is to bring back as many of the activities, entertainment and family fun that have always been the hallmarks of CarmelFest, but in a safe and responsibly managed way as we possibly can.”

Krusie said to make that possible, CarmelFest had added nearly double the footprint that exists at One Civic Square with the inclusion of Carter Green space between the Palladium and The Tarkington buildings.

“This will allow us to physically space out the marketplace vendors and food vendors at both locations and incorporate the Gazebo stage at Civic Square and a large mobile stage on the west side of Carter Green projecting sound eastward toward the Monon Trail,” he said.