You are at:Home»Current in Geist»Geist Community»Avance earns Indiana All-Star honor

The Wildcats (28-3) reached the Class 4A state championship game before losing to Carmel 51-46 in overtime April 3. 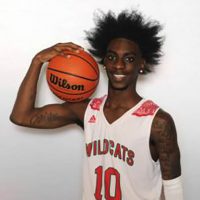 “His work ethic and motor were very energetic,” Keefer said. “By him being such a hard worker, that made our team exceptional. We won a lot of games (53-5 the last two seasons). I feel we were out-hustling teams. I didn’t play many people, usually seven, and very seldom took (Avance) off the floor. I kind of wore him out, I think.

“He responded every time and kept playing great games.”

Avance was named as one of the Indiana All-Stars April 19 in what game director Mike Broughton termed as one of the deepest Indiana teams as far as NCAA Division I players in at least 20 years.

“It’s something that just kind of puts the icing on the cake being selected to be an Indiana All-Star.” Avance said. “It just means you are top notch and a part of a deep, talented class.”

The Indiana All-Stars will play Kentucky June 11 in Owensboro, Ky., and June 12 at Southport Fieldhouse in Indianapolis. The All-Stars will face the Junior All-Stars June 9 at Brownsburg High School.

The 6-foot-1 Avance, who has narrowed his college choices to IUPUI, Texas Southern and Miami (Ohio) University, averaged a team-high 17.3 points and 4.3 assists. He shot 48.7 percent from the field.

“I feel as if I made the most improvement overall from the end of my sophomore year to junior year, just having to learn and understand guys older than me,” he said.

Avance said he learned how to take care of his teammates while still trying to show what he could do on the court.

“It made me grow and develop as a player mentally,” he said. “I made my most improvement this year physically, getting my body prepared for long battles.”