The COVID-19 pandemic has hit the sports, concert and theater industries hard, forcing many postponements and cancellations. 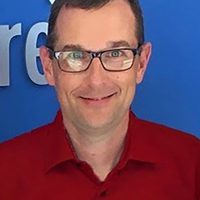 As a ticket resale marketplace, Renny Harrison’s Carmel-based Fanfare Tickets is reliant on those events.

So, it was pretty bleak for several months starting in mid-March 2020 when shows were shut down. However, Harrison is optimistic better times are ahead.

“The past few months have been very good for us, with the NCAA Tournament events, the Big Ten Conference tournament (for men’s basketball) and the Pacers,” the Carmel resident said. “Even though the team isn’t great, it seems like people are wanting to go to Pacers games, and we’ve been able to buy and sell tickets. All of those things together have been good for us.”

The NCAA Tournament capacity was limited at all the venues, creating higher demand at Hinkle Fieldhouse, Bankers Life Fieldhouse and Indiana Farmers Coliseum.

“The demand at the smaller venues far exceeded the supply,” Harrison said. “There were basketball fans that wanted to experience games at Hinkle and those games were very popular.”

Harrison said it has been a slow row back, as he anticipated.

“We saw that it wasn’t going to be one day, and all of the events would be back and suddenly our business was going to be back to 100 percent,” he said. “When things were bad, they went bad suddenly.”

The shutdown in March 2020 happened during the Big Ten men’s basketball tournament and prior to the NCAA Midwest Regional for men’s basketball. Both events were in Indianapolis. The Indy 500 and a summer concert schedule were wiped out as well.

“One thing we had to do was pay back our customers for all the canceled events,” he said. “There were a lot of refunds, and that process took a few months.”

Harrison said live events came back faster in the southern part of the U.S., so Fanfare changed its focus to buying and selling tickets for events in Florida and Texas.

“It was on a small scale, but it helped support our staff,” Harrison said.

That helped the business formulate a plan for selling tickets in the fall of 2020 for limited attendance at Indianapolis Colts games. Last season, only 2,500 attendees were allowed for the season’s home opener and 7,500 for the second home game. Capacity eventually increased to 12,500 but then was reduced to 10,000 for the final home game.

Harrison said there was concern that some of the Colts games weren’t selling their full allotment, but as more people receive vaccinations, he said fans are ready to return to events.

“We didn’t know what the public’s appetite for these events would be with the reluctance to be in crowds,” Harrison said. “Overall, we learned people want to be out and want to experience live events.”

It was announced April 22 that the Indianapolis Motor Speedway will allow 135,000 fans – approximately 40 percent capacity — for next month’s Indy 500.

“I’m hopeful that by late summer we’ll start to see a steady schedule of concerts, both at Ruoff Music Center and the other venues that host events,” Harrison said.

Harrison, who has six staffers, said that total is reduced from before the pandemic, when he had one more full-time and one more part-time employee.