“Everyone had a good time,” Strueder said of the mountain bike races. “It’s still competitive but we were all friends after it. It’s that adrenaline rush that I think most of my friends are addicted to trying to hit the biggest jump, have the biggest trick and just to be faster than one another. It’s a great, healthy, competitive sport. It’s awesome.” 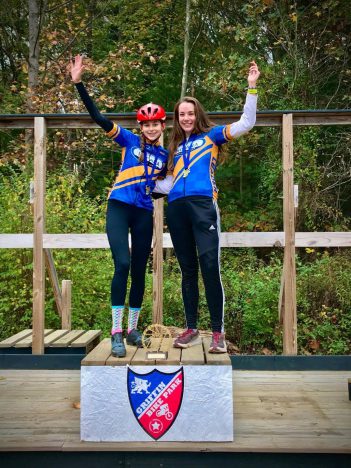 Guerin Catholic senior Dominic Stein was the one who encouraged Strueder to join. Strueder rode in the varsity category last season.

“The varsity did four laps. A lap was about 3 to 5 miles around,” said Strueder, walo also wrestles at FHS.

Northside Indy coach Tim Banks, a Level 3 coach with the National Interscholastic Cycling Association, is seeking more members for the team. The mountain bike league is for grades 6-12.

“We’re a composite team, which means we take kids from any school,” said Banks, a Westfield resident.

Banks’ daughter, Sarah, a Guerin Catholic sophomore, was the sophomore state champion. Allison Wozniak, a Guerin junior, was the state champion in the junior varsity category. Wozniak is a Fishers resident. The 2020 season ran from July to the end of October.

Banks said several Guerin students knew that he and his daughter enjoyed mountain biking. They discussed starting a team.

“About a third of our kids are homeschooled and the rest are from different schools,” Banks said. “Students from other schools can join our team if they don’t already have a team.”

Sarah, who competes in cross country and track and field, competed in her first mountain bike race when she was 10 years old.

“I started running track to help with my biking,” Sarah said. “I like that mountain bike league is just for fun and everyone is out to have as much fun as they can. It’s not super competitive. When we started, I didn’t know what to expect.”

Banks said they are seeking volunteers and riders.

“We’re trying to get more women involved, women coaches and women riders,” Banks said. “We have a strong women’s program already, but we’d like to expand it.”

Seven girls were on the team, which was the most on any team in the state in 2020, Banks said.

“We’re looking to help schools get programs started or help educate coaches,” Banks said.  “We can help teams build their team and show them how to do it. “

Northside Indy has a Facebook page, under NICA Northside Indy Mountain Bike Club, and information can be found on the website, indianamtb.org.