You are at:Home»Current in Carmel»Carmel Community»Site selected for Pirate Cat statue, fundraising under way

The Pirate Cat bronze statue memorial is becoming closer to reality, thanks to a fundraising campaign.

Pirate Cat owner Amanda Cancilla has sought to have a public display of a life-sized statue of her cat, who died in April 2020, near the Monon Greenway. She lives just south of the Carmel border in Indianapolis, and her late orange and white cat, who loved the outdoors and was known as the “Mayor of the Monon,” would frequently wander around the Monon Trail in Carmel, greeting visitors. 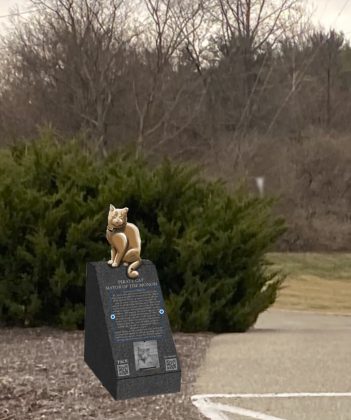 A statue of Pirate Cat is planned near the Monon Greenway on property owned by the USTA/Midwest Tennis and Education Foundation at 1310 E. 96th St. (Submitted photo)

Cancilla’s appeal to Carmel Clay Parks and Recreation to have a statue placed along the Monon was rejected Sept. 29.

“I was pretty sad about that,” Cancilla said. “When I asked the USTA/Midwest Tennis and Education Foundation (which is near the Monon at 1310 E. 96th St. in Carmel) if they would be interested in allowing the memorial to be placed on their property, they were happy to comply. It took quite a while for the legalities to get worked out.”

Cancilla started fundraising through a GoFundMe campaign to have a bronze statue of Pirate Cat made that will sit atop a granite pedestal.

“The donations so far will go toward down payments to Baer Bronze Foundry in Utah and to Thomas monuments in Indianapolis,” Cancilla said. “I’m extremely encouraged that this is all going to finally happen. It will probably be in six months or so, as the granite for the base has to be shipped in.”

Cancilla said there will be a celebration of life for Pirate Cat after the memorial is finished and installed.