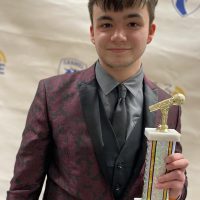 Eighteen WHJE team members earned a combined 23 awards in the competition, held virtually this year. Students from across the nation participated in the February event. Winners were announced March 6.

Purdue University-bound senior Wil Courtney said he believes WHJE is successful because of the personal accountability the students are expected to maintain.

“The fact that we are student-run gives us the ability to represent our station in a way that is really special,” Courtney said. “The super friendly but critical culture inspires excellence. I am honored to be a part of that drive shared by my peers that enables us to do things that impact the future of our radio station.” 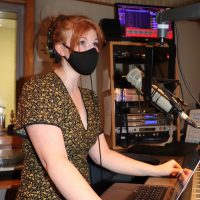 “I love the creative process,” Carlson said. “I enjoy showing it to our faculty supervisor, Dominic James, receiving his critique and then going at it again. That repetitive process for improvement keeps me going and adds to my creative resume.”

In the fall, Carlson will attend Loyola University in Chicago, where she will major in film production with minors in marketing and data analytics.