You are at:Home»Night & Day»Entertainment News»Nagy to perform Irish music for children’s series at The Tarkington

It is certainly fitting that Katherine Nagy will make her debut at the Center for the Performing Arts shortly after St. Patrick’s Day.

Nagy moved to the United States from Ireland when she was 7. After moving, she still spent every summer in Ireland visiting relatives. Her original music reflects a definite Celtic influence. 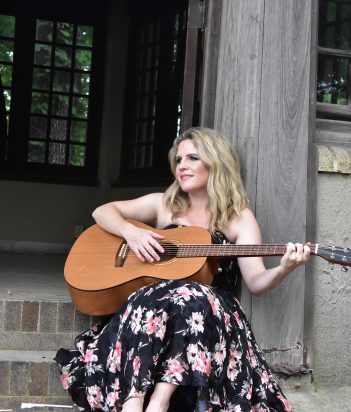 Katherine Nagy will perform Irish music with her band at 10:30 a.m. March 20 in the Peanut Butter & Jam series at The Tarkington at the Center for the Performing Arts in Carmel.

Nagy, an Indianapolis resident, and her band will perform at 10:30 a.m. March 20 in the Peanut Butter & Jam series at The Tarkington at the Center for the Performing Arts in Carmel. It will be her first appearance in the series, designed for ages 1 to 7.

“I’m a mother of three, so I do a lot with children on an everyday basis,” Nagy said.

Nagy said she has performed Irish music with her band at her children’s schools on St. Patrick’s Day. They would talk about the Irish culture, make Irish tea and have Irish soda bread.

“So, I’ve done this type of a show before but never for a formal thing (like the) PB & J (series),” Nagy said. “I don’t consider myself a children’s entertainer. The show will be music that adults will enjoy, too. The show is intended for children, and I will be talking to the audience like they are children. But the music is going to be traditional Irish music. It’s not going to be children’s music.

“We’ll do a blend of blend of familiar Irish ballads and pub songs and then my original music that is Irish.”

Alano is the director of the Irish Arts Academy.

In addition, Nagy will be perform Irish music during xZOOberance at noon March 25 at the Indianapolis Zoo.

Nagy said singer/songwriter, plus folk, is her main genre.

“There’s a little bit of Americana in there, too,” she said. “I’ll do Dolly Parton, Lady Antebellum, Patsy Cline covers. Then I do some Norah Jones, those are the covers I do. The original songs I do are folk and a little bit of that bluesy and Americana stuff.”

Nagy said she was able to perform outdoors in the summer of 2020 amid the COVID-19 pandemic.

“I played with the Indy Parks concert series at Eagle Creek Park,” Nagy said. “My band was able to play at the Midtown Plaza in Carmel. I played at the Carmel Farmers Market and I’ll be doing that again. I was really happy to be able to play outside.”

The Peanut Butter & Jam performance will be her first indoor show of the year.

“I don’t play a ton of gigs, anyway,” she said. “I was focusing more on writing this winter. I’m working on a new album I can’t wait to start recording, hopefully in studio this summer.”

Nagy released three songs in 2020, one in October, one in November and one for Christmas.

“I was able to work with my band members and record my vocals at home,” Nagy said. “The silver lining of the past year is learning how to create new music using all the wonders of technology that they have.”

Tickets for The Tarkington show are $10 per child with free tickets for two adults with each child ticket purchase. Masks are required for those 8 and older and are encouraged for ages 3-7. With capacity limitations, the performance will be livestreamed on Facebook and YouTube for those who can’t attend in person.