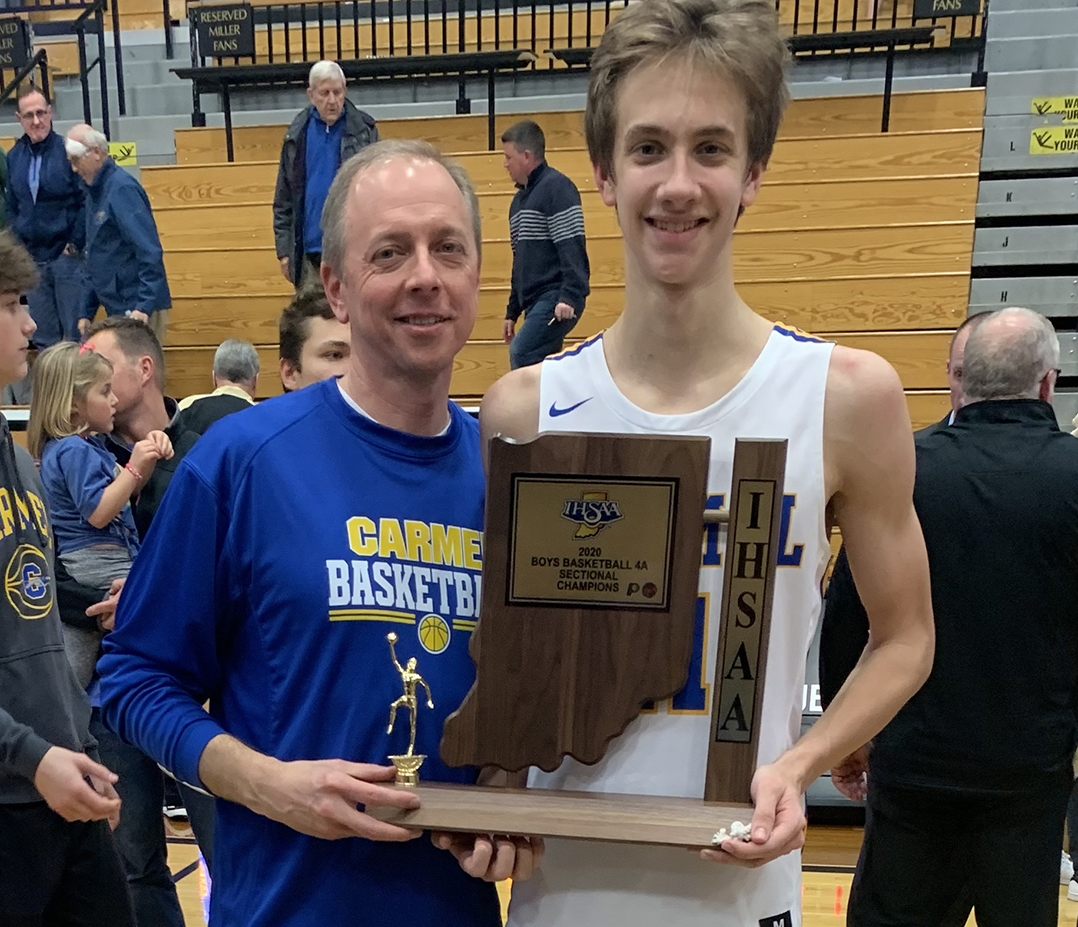 Matt Waddell is the first to admit his son, Brian, is more athletic.

“I can’t argue in that in any way,” Matt said. “He gets off the ground a lot better than I ever did.”

Matt was no slouch. The Indiana Basketball Hall of Famer helped lead Purdue University to Big Ten championships in 1994 and ’95.

Brian, a Carmel High School senior, does have another edge. At 6-foot-7-inch, he is three inches taller than he his dad was.

“I think Brian is just now starting to realize his potential,” Carmel coach Ryan Osborn said. “He’s building confidence within himself, and he can get us going. He plays with great energy. He’s been really consistent for us. He plays within himself. You look at his shooting percentage, and he takes shots he knows he can make.”

Class 4A No. 2 Carmel (20-2) drew a first-round bye in the Class 4A Carmel Sectional and will face the Fishers/Hamilton Southeastern winner at 6 p.m. March 5. 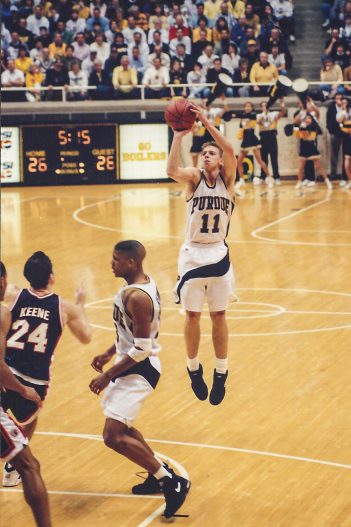 “We know if we focus on being the best team we can be, everything else will take of itself,” said Brian, who missed five games with a sprained right ankle before returning Feb. 19.

Brian, who averages a team-high 15.6 points per game on 58 percent shooting, has NCAA Division I offers from Wright State and the University of Incarnate Word, which is coached by ex-Purdue player Carson Cunningham.

“My mental game has been the most (improvement),” Brian said. “I came into this year more confident in myself. That’s helped me become a better player and shoot the ball with confidence every time.”

Brian didn’t play much on Carmel’s 2019 Class 4A state championship team as a 6-3 sophomore. He grew three inches before his junior year but missed some time because of mononucleosis at the start of the season and later suffered a stress fracture. He missed time his junior but finished strong, averaging around 10 points per game as Carmel won its sectional before the COVID-19 pandemic ended the postseason.

“Getting physically stronger has been a huge part of it,” Brian said. “I got stronger in the weight room and putting on weight. I’m able to play against other people who are bigger and stronger than me.”

Brian said his demeanor is much like his dad’s. His father coached him on travel teams for several years.

“I’m not really a screamer,” Brian said. “I’m not going to get mad if I need to correct stuff. I’m just going to do it. He wanted to make sure I was the best player but did that in a low-key way. He coached me to play to my abilities.”

Matt said the last 12 to 18 months have been fun to watch his son improve.

“He’s always put a lot of effort into it and worked hard,” Matt said. “He is a late developer. That’s not a bad thing. It’s good it’s happening now and not a year from now. He’s physically developed the last year-and-a-half and mentally getting stronger. His confidence in (his) game and himself has increased, and that’s the exciting part for me. He’s always kind of undervalued himself and didn’t realize how good he was. He’s a team-kid first. He’s going to play smart and play the right way. He’s going to give up a good shot for a great shot for a teammate. That’s the way I tried to play.” 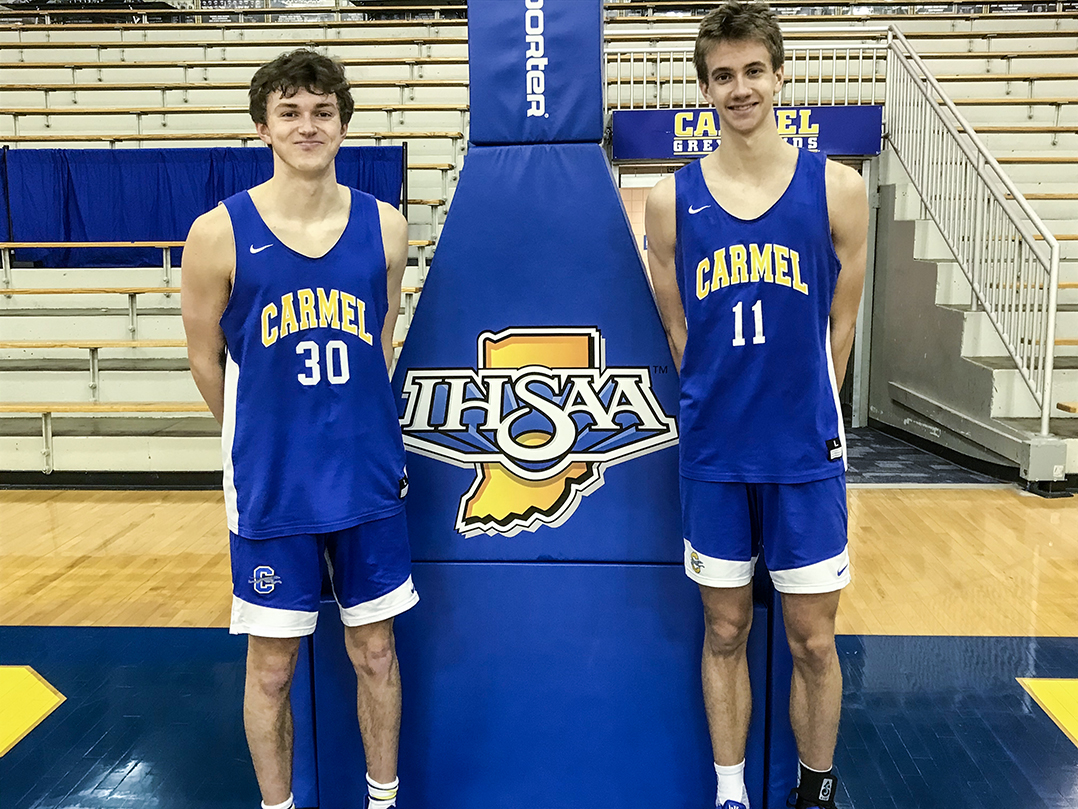 A 1990 Indiana All-Star from Tipton, Matt redshirted as a Purdue University freshman. He played two seasons against Indiana University when Todd Leary, a 1989 All-Star from Lawrence North, was on the Hoosiers. Leary’s son, Wil, a senior for the Greyhounds, played with Brian on Carmel Pups growing up.

Wil has been a key contributor for Carmel, mostly coming off the bench.

“I feel like I’ve worked on improving my defense because that is kind of why I haven’t gotten as many minutes as I’ve wanted,” Wil said. “Over the last year, I’ve been working on my defense mostly and letting the offense come.”

Wil said he likes coming off the bench.

“It makes it easier to come in and make an impact,” said Wil, who averages 4.4 points per game.

“Wil is a great guy to have on the bench and be able to rely on,” Brian said. “There’s times when we need Wil to hit a big shot for us and he’s going to do that most of the time.”

In addition, another Carmel senior guard, Bryce Beery, is the son of a Purdue athlete. Carmel Dads’ Club president Jack Beery is a CHS graduate who played football for the Boilermakers. Bryce’s older brother, Britt, a 2017 CHS graduate, is an offensive lineman at IU. Bryce, a 6-3 guard, averages 3.3 points per game.