You are at:Home»Current in Carmel»Carmel Community»40 homes planned on Carmel’s Asherwood estate as sale nears 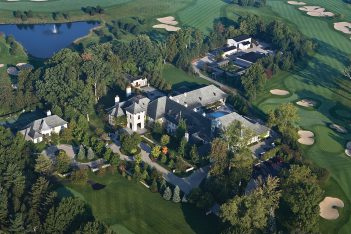 The Asherwood estate in Carmel is expected to soon have new owners.

The 107-acre property on Ditch Road is set to be divided between a private buyer who plans to purchase the main house and surrounding 20 acres to use as a personal residence and Gradison Land Development, which has filed plans to build a 40-lot subdivision on the remaining 87 acres. The sale is expected to close soon.

Gradison is partnering with Carmel-based Old Town Design Group to develop the new subdivision, which will feature lots of one acre or more. Lots are expected to be for sale later this year.

Financial details of the deal have not been released.

Philanthropist Bren Simon donated the estate to the Great American Songbook Foundation in 2017. Proceeds from the sale will help secure the financial future of the foundation, which is based on the campus of the Center for the Performing Arts in Carmel.

“As we’ve stated previously, we considered many possibilities to maximize the value of Mrs. Simon’s generous gift before concluding that a sale was the best course for the Foundation,” Songbook Foundation Executive Director Chris Lewis stated. “Now, with the financial security the sale provides, we can confidently move forward with our long-term planning.”

Future plans for the foundation include creating a Great American Songbook Hall of Fame Museum to house its collection of musical arrangements, recordings, memorabilia and other items.