You are at:Home»Current in Carmel»Carmel Community»2020 CHS grad killed in car accident remembered for art, service

Gabriella Marshall was thrilled to learn recently that she was on the right path to pursue her passion of becoming an artist. 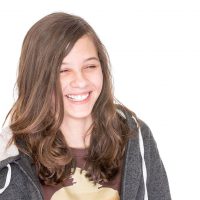 The 2020 Carmel High School graduate, known as Gabby to her friends, had recently switched course, deciding at the last moment to apply to the Herron School of Art instead of pursuing theater at Ball State University. She worried that she wouldn’t be accepted because she hadn’t taken any art classes, but after quickly throwing together a portfolio, she later learned that she had made the cut.

That dream came to a tragic end the afternoon of Oct. 23 when the car she was driving crossed the center median in Allen County and collided head-on with a semi-truck. Gabby, 19, the only passenger in the vehicle, was pronounced dead at the scene. Police are still investigating what led to the accident.

Andrew Marshall, Gabby’s father, said his daughter was a typical teenager who loved her friends, writing and volunteering for the Humane Society, but that she also struggled with insecurity and fitting in at times. He said she thrived under a deadline, often procrastinating on homework until the last minute but then turning in an “absolute masterpiece.”

“She worked on her art the same way,” he said. “She was very good under pressure.”

CHS technical theater instructor Andrew Okerson agreed. One of his favorite memories of Gabby was her ability to run complicated video projections during a state competition last year.

“At the end of the night, we were told we took best tech in the competition,” Okerson said. “That was in no small way thanks to Gabby. Of course, she was incredibly humble about it, but I could tell she was also very proud of her team for making a great show happen.”

CHS Director of Theatre Maggie Cassidy said she was impressed with Gabby’s heart for serving others. She said Gabby wanted to create a free theater camp for kids who would not otherwise be exposed to that type of opportunity.

“She really wanted to be able to influence younger people and be a good and positive role model,” Cassidy said.

A GoFundMe account has been set up to help the family cover funeral expenses. Donate at gofundme.com/f/memorial-gabriella-marshall. Donations can also be made in Gabby’s name to the Humane Society for Hamilton County or any literacy program to honor Gabby’s love for reading.