You are at:Home»Current in Noblesville»Noblesville Community»Noblesville receives grant from Duke to restore parts of White River

The City of Noblesville has received a $25,000 Powerful Communities Grant from Duke Energy for habitat and forest restoration and conservation along the White River. 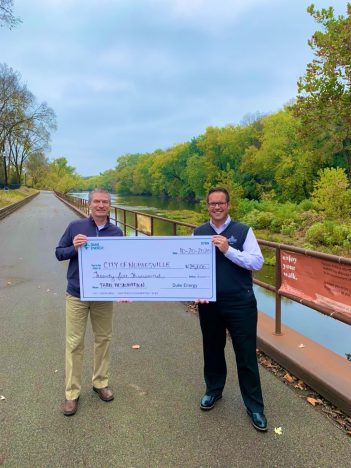 “We are grateful for Duke Energy’s conservation efforts and funding to help preserve one of our city’s amenities and open it both visually and physically to more resident interaction,” Mayor Chris Jensen stated.

This month, the project – which is expected to take a year to complete — targets the east bank of White River between Maple Street and Division Street for invasive species removal, native species planting and habitat restoration.

“The White River Trail Riparian Restoration seeks to create accessible pedestrian approaches to White River in order to enable residents to interact with and appreciate the river. The density of invasive overgrowth has literally become a barrier to residents’ access to long stretches of the riverbank,” Noblesville’s MS4 Coordinator Tim Stottlemyer stated.

“The template we create of sequential actions for returning an area to native growth will outline monitoring protocols for measuring effectiveness and serve as a guide for similar efforts on other city-owned land,” Stottlemyer stated. “We are certain that year after year, more residents will discover that they can walk right down to the river without fighting through overgrowth to enjoy a long under-realized amenity.”