You are at:Home»Current in Fishers»Fishers Business Local»Back in business: Kincaid’s Meat Market reopens in Fishers

Kincaid’s Meat Market in Fishers has reopened closing for several months due to flood damage, which required approximately $400,000 in repairs and the purchase of new meat processing equipment, which was only 8 months old when it was damaged. 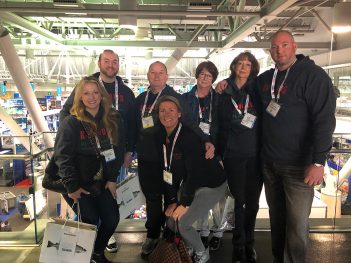 The Dugdale family, which owns the shop, celebrated Oct. 10 with a grand reopening ceremony.

The family purchased Kincaid’s in 2015. Joe Dugdale previously owned Dugdale Beef Co., which sold meat to Kincaid’s. Kincaid’s originally opened in 1921 in Indianapolis at 5605 N. Illinois St. It opened its second location at 11547 Yard St. in Fishers District in November 2019.

“The Fishers District developers came to us and asked us if we would consider opening a second store here in Fishers,” Joe Dugdale said. “We were in the process of talking to Archer’s Meats and had a verbal agreement to take over their space on 116th Street knowing they were going to bulldoze and rebuild. We were told we would be in by 2018, and that didn’t happen.”

Instead, the Dugdales opened the second store in Fishers District. The Fishers and Indianapolis stores are similar.

“This (Fishers) location offers wine that the other location does not, and it has more fresh fish options than the other store has,” Dugdale said. “The clientele is different up here than it is at the other store, so the product line has changed a little bit off that.”

“The service we offer and the quality of product that we offer is unmatched by anybody,” Dugdale said. “We are a specialty meat market. We are not a grocery store meat market. It is truly you get what you pay for.”