You are at:Home»Current in Noblesville»Noblesville Community»Noblesville fundraiser raises $18K for boy with cancer 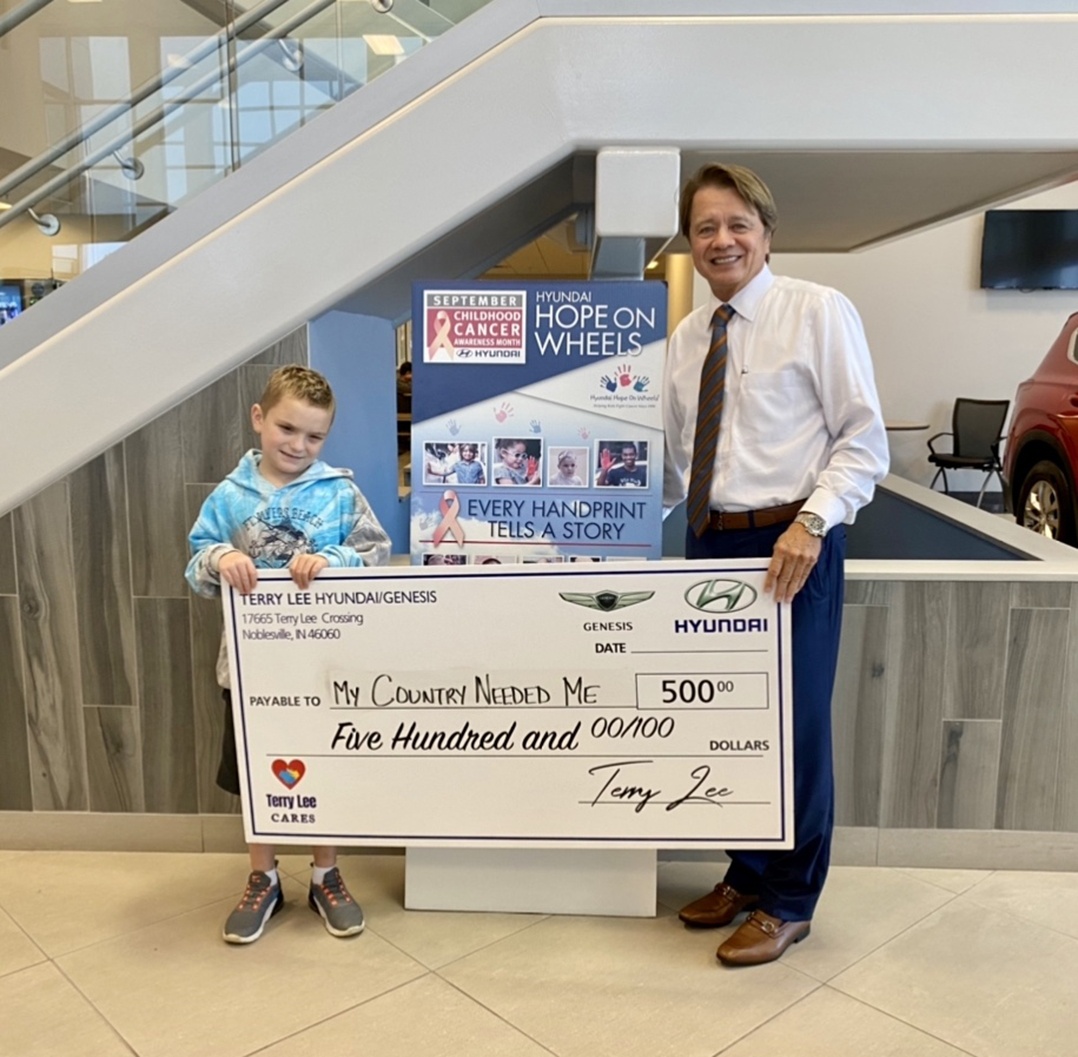 Knox Pharis, left, benefitted from the Terry Lee Cares Program, which donated $500 to My Country Needed Me, the fundraiser for Pharis’ trip to Canada to take part in an experimental trial for retinoblastoma. Terry Lee, right, presents the replica check. (Submitted photo)

Although Myrna Sandage’s Noblesville-based benefit, My Country Needed Me, typically benefits veterans, she knew she had to take action when she saw information about Knox Pharis, an 8-year-old boy from Tipton County with retinoblastoma.

Since her motorcycle ride fundraiser for My Country Needed Me was canceled earlier this year because of the COVID-19 pandemic, she decided to conduct a different event to benefit Pharis.

Pharis was diagnosed with retinoblastoma in both eyes when he was 2 years old, which eventually led to the loss of his right eye. Pharis’ cancer went into remission, but in January, he and his grandparents, who are his legal guardians, were alerted that the cancer had returned in his left eye.

“So, they wanted to take the eye out and his grandmother would not allow them to take the eye out because she kept saying she has to give him every chance humanly possible,” Sandage said. “They had exhausted all options, and she thought she was going to have to give in and let them take Knox’s eye, but then she found a clinic that is doing an experimental trial in Canada. She called them and they said Knox sounded like the perfect candidate, but they needed $85,000 because with it being out of the United States and in Canada, insurance would not cover it.”

Pharis’ aunt posted the fundraiser on GoFundMe, where Sandage first learned of it.

“So, I was online and I knew Knox’s grandparents, aunt and family, and I had met Knox a couple times and saw where they had this GoFundMe, and I told my boyfriend that we have got to do something. We have to help,” Sandage said.

Sandage asked Knox’s family if she could conduct the motorcycle benefit ride in honor of Knox and, after receiving their blessing, she pulled the event together in four weeks.

“The donations from the community were overwhelming,” she said.

My Country Needed Me hosted a bake sale, sold T-shirts and had a motorcycle ride and a hog roast. The efforts raised $18,000 for the family. More than 220 motorcyclists participated in the ride.

In August, the family received $500 from the Terry Lee Cares Program.

Pharis and his family left for Canada Sept. 27. After quarantining for 14 days, Pharis will begin the treatment, which is a three-month process. The family must remain in Canada the entire time.