You are at:Home»Current in Westfield»Westfield Education»Anonymous survey shows Westfield teachers’ dissatisfaction with administration 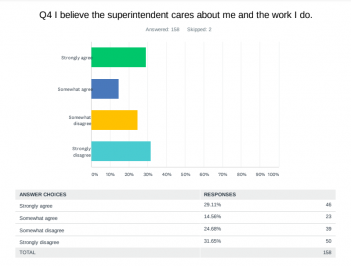 A screenshot of a survey question and the results. (Submitted image)

The Graham, Hopper, Farrer & Wilson law firm recently published results following a survey of teachers within the Westfield Washington Schools district. The survey was commissioned by the Coalition of Stakeholders and Teachers in Westfield group and was conducted following the reassignment of past Westfield High School Principal Stacy McGuire to director of alternative learning and several subsequent community protests.

Results showed that more than 40 percent of teachers believe that Supt. Sherry Grate doesn’t understand the needs of their building or students, while only about 25 percent believe that Grate makes decisions in the best interest of students. For the question, “I believe Sherry Grate is the right person to lead our district the next five years,” less than 30 percent selected the “strongly agree” answer, while more than 50 percent selected the “strongly disagree” answer. However, the majority of respondents selected either “strongly agree” or “somewhat agree” to feeling happy and looking forward to coming to work each day.

There were 33 survey questions, and 160 teachers took the survey. Responses were anonymous. The survey was sent to teachers via email and conducted during the final two weeks of August.

To view the results in their entirety, visit ghfwlaw.com/survey.asp.