When people ask Les McKinsey when he is going to quit his service to Noblesville’s Wayne Township Volunteer Fire Dept., he has a quick reply.

“When they put my casket on the truck on the way to the cemetery, you’ll know I’ve quit,” he said.

“I’m just out doing a job I like to do and I’m not here for the hero stuff,” McKinsey said. “The people who do the hero stuff are beyond my capabilities.”

“I gave it up because it was getting to be too much of a job, and at my age, I just couldn’t do it,” he said. “When I first took over, we didn’t have any emergency medical technicians or any paramedics.”

“The old station was great for the early times when we only had a few personnel and just one or two trucks,” McKinsey said. “But as we advanced, we got more into the medical and rescue part of it. We didn’t have room.”

The new station has room to put all the trucks inside.

“I think it’s going to work out much better because we have room to grow,” McKinsey said. “With the township growing like it has been, we are going to keep adding stuff to the station. I don’t know how much longer I’m going to be around, but I do what I can to help out. At my age, I’ve slowed down quite a bit but I’m not through helping people out.”

McKinsey is a driver.

“Whenever we get a call and I’m able to go, I go,” said McKinsey, who is recovering from a recent bout of pneumonia.

McKinsey worked at Delco Remy, a division of General Motors in Anderson, for 30 years before retiring in late 1992.

“I’ve had a couple of part-time jobs but nothing to interfere with me being in the fire service,” he said. “The most rewarding part has been working with different personnel from different departments and see how they operate compared to how we operate. At one time, our department was strictly men only. In the last 20 years, we’ve taken on women as our EMTs, and they’ve done a fantastic job.

“The women do just as good a job as the men can and a lot of them do a better job than the men can.”

McKinsey said when the township department started in 1956, a lot of the volunteers were local farmers.

“Les has seen the department go through a lot of changes,” Wayne Township Volunteer Dept. Fire Chief Ronald Taylor said. “He’s a great resource, has a lot of knowledge, helps out the younger guys with how to run the trucks. (He) takes them out driving and training. It seems like he knows everyone, so when we are going on a call, he’ll say this is Mrs. So-and-So and Mr. So-and-So.” 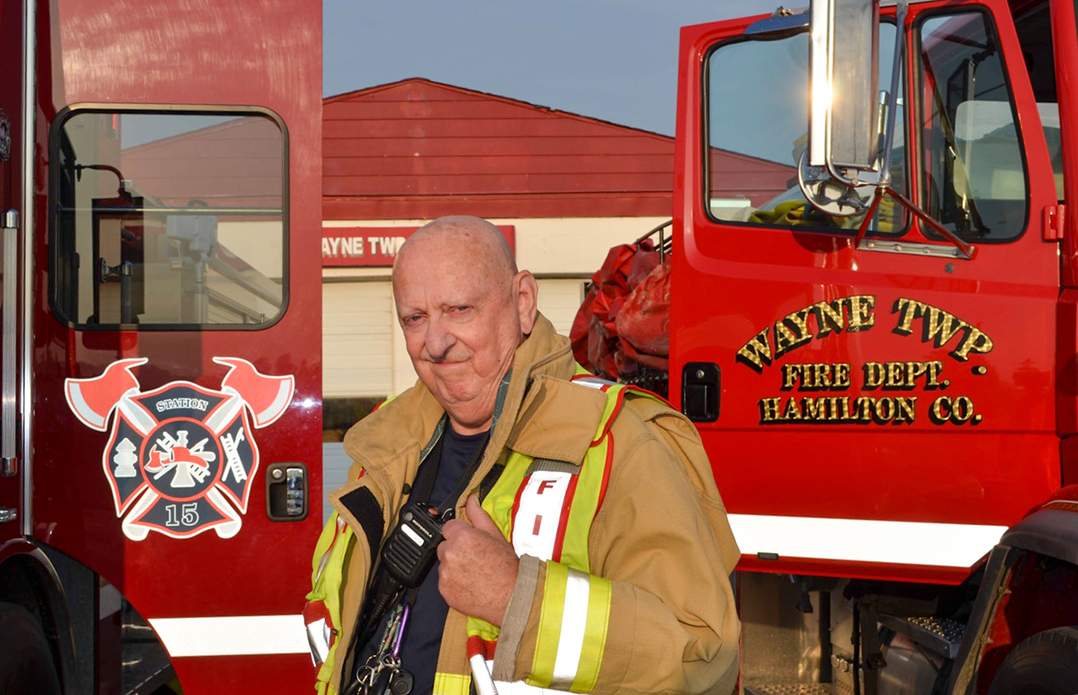 Les McKinsey has been a volunteer for the Wayne Township Volunteer Fire Dept. for 50 years. (Submitted photos)

“The old station was added on to twice,” the Noblesville resident said. “It was six bays but they were very small and (each) time you opened up the truck doors they were touching. There was hardly any room to move around the vehicles and store equipment. It is probably triple the space. We can fit three of the old buildings in there. We didn’t have space for training in the old building. We had to pull trucks out to hold training.”

Taylor said all of equipment is now stored inside. The training room can double as a community room that is available for rent.

“We went from four back-in bays to six pull-in bays, which gives us eight bays we can park trucks in,” said Taylor, who has been fire chief since 2014. “It’s not fully complete because we have to add upstairs, which will become our living quarters. It will have a day room, bunk room, and our locker rooms will be upstairs. We didn’t have the money to get all that completed in this section.”

A firefighter paramedic is on duty from 8 a.m. to 4 p.m. Monday through Friday.

“We’re volunteer the rest of the time,” Taylor said. “We have eight paramedics that volunteer. There are about three to four days they work the same day as their full-time job.”

Taylor, who has been with Noblesville Fire Dept. for 27 years, said some firefighters spend the night when volunteering. Taylor’s wife Pamela, who works for Westfield Fire Dept. as a civilian paramedic, is the emergency medical service captain and public information officer for Wayne Township Fire Dept.

“We have close to 29 members,” Pamela Taylor said. “The members here are so dedicated.”