Many Americans took up new hobbies during the COVID-19 pandemic. According to recent news reports, beekeeping has become increasingly popular. Locally, beekeepers have a place to gather at the North Central Beekeepers Club.

The club is in its sixth year. It meets the third Wednesday of each month at 6:30 p.m. at Cool Creek Park and Nature Center.

“It’s for all levels of beekeepers, from novice to experts, including people who are just interested in becoming beekeepers,” said Peter Murphy, a Carmel resident and three-year member of the club.  “Every month, the core team gets together and plans the next several months of who the guest speakers are going to be, and the topics based on the time of the year.

“This month and next month, in addition to our regular meeting, we are having an introduction to beekeeping.”

Other fall topics include mite control, honey extraction and bottling. In addition, a monthly presentation by a member who also is a master gardener is planned. The gardener will talk about what plants are blooming and which flowers are good for bees.

“Right now, there’s not a lot blooming, so we talk about supplementing bees with sugar water so they can build up the honey they will use during the winter to keep the colony alive,” Murphy said.

“For my wife and I, it was primarily to help our vegetable garden,” Murphy said. “The more pollinating activity you have on a plant, the bigger the flowers and more plentiful flowers and vegetables.”

The Murphys have five hives – three at their Carmel home and two at Tracy Pielemeier’s property in Westfield. Pielemeier is a founding member of the North Central Beekeepers Club. This is her eighth year as a beekeeper.

“At the (start), we had bought a property with an old orchard on it and we were aware of what bees do, and I said, ‘We should have bees,’” Pielemeier said. “I talked my dad into having bees and that lasted two years.”

Pielemeier said she attended “bee school” and a program presented by The Beekeepers of Indiana.

“I went to bee school and we started having bees of our own and just realized how incredibly fascinating it is,” Pielemeier said. “Beekeeping continues to be fascinating. You don’t just learn it and move on. It’s like a mystery book – what happened here? How do I know and what do I do about it? It’s an ongoing fascination.” 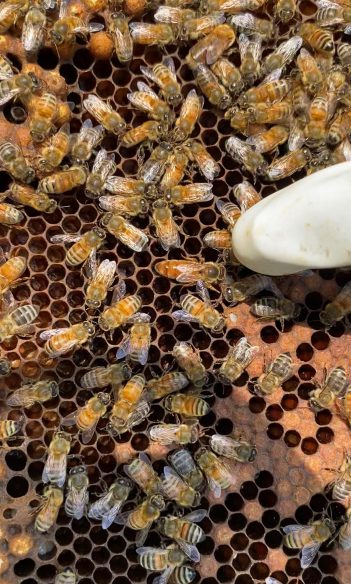 A beekeeper points to the queen.

Between 30,000 and 50,000 bees occupy Pielemeier’s hives during the summer months. The male bees die in the fall and the population decreases durnig the winter months.

“They form a cluster around the queen and it’s a living heat ball that’s constantly rotating,” Pielemeier said. “Bees do not hibernate or sleep. They keep her at 92 degrees.”

Many of the North Central Beekeepers Club members are from central Indiana. Some reside as far north as Kokomo and Tipton.

“There was a need for a club in this area because I originally attended a central Indiana meeting down at Holliday Park because there was nothing north,” Pielemeier said. “I just decided I didn’t want to drive down to (Indianapolis) anymore and thought there has to be more people in Hamilton County. I had a friend in the bee business, and so we started a bee club in Westfield.”

Typically, 25 to 30 people attend North Central Beekeepers Club meetings. Most have a hive. 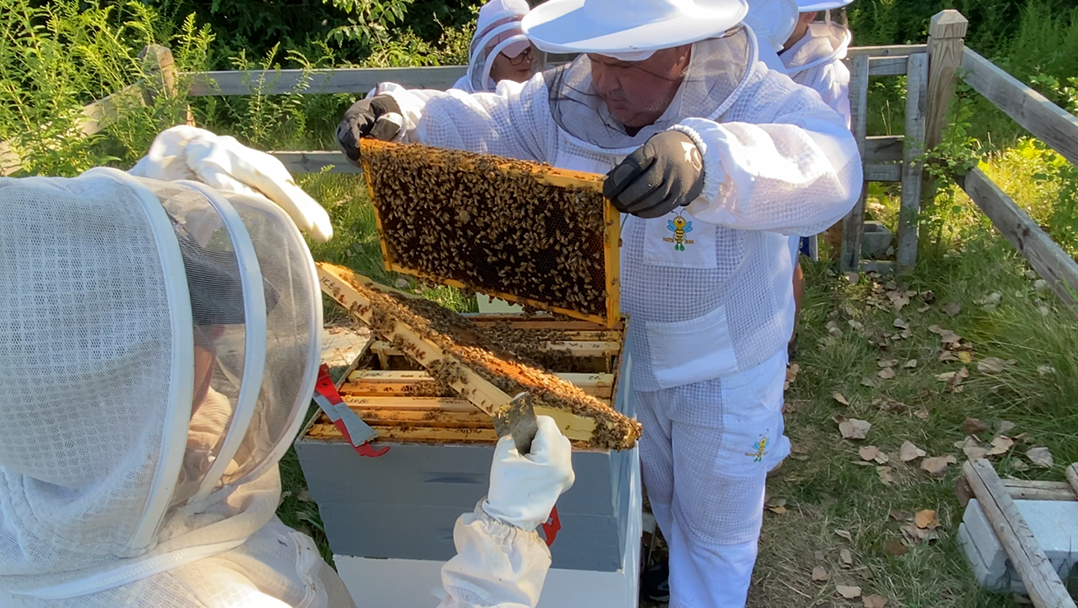 Typically, bees stay on the frame when removed from the hive.

The fear of getting stung

Westfield beekeeper Tracy Pielemeier said getting stung is the most common fear among people who are new to beekeeping. She said on average, she gets stung four times a year.

“I always say they don’t form an arrow and come at you like in the cartoons,” she said. “If you’re frightened, turn around and walk slowly away. Most people are so curious when you pull a frame out and they realize there’s no threat going on. They’re just so surprised and intrigued that 98 percent of the time, the bees stay on the frame.””