When Noblesville couple Mike and Stacey Spencer concluded that the restaurant industry was over-saturated, they decided to go in a different direction with their eatery.

They converted an antique trolley into a food truck.

“You see big companies constantly shutting their doors, and this is pre-COVID, anyway. The industry is overly saturated with restaurants popping up left and right and places constantly closing,” Mike said. “It’s really hard to run a brick-and-mortar business because of all the overhead expenses and competition.”

Having noticed a successful trend in the food truck industry, the Spencers went that direction with their business.

“It was becoming more and more popular,” Mike said.

Mike earned a business degree in college, and after working in health care for 22 years, he was ready to pursue an entrepreneurial venture. That’s when he and Stacey found an antique trolley and decided to convert it into a food truck.

“We went and looked at it and wound up buying it too late in the season to start building it out, so it sat,” Mike said.

This spring, the Spencers converted the trolley into a food truck and branded their business The Urban Artisan. Previously, the Spencers worked out of the Noblesville VFW branch selling food to members and through DoorDash to raise brand awareness.

“We figured with the uniqueness of the trolley and the proven reviews of our food, if we did this correctly, it would be successful and we would have control over it,” Mike said.

Initially, the Spencers planned to take The Urban Artisan to corporate offices during lunch time and rotate between businesses Monday through Friday and then cater events in the evening. But because of the COVID-19 pandemic, they changed their business plan to focus on small events, apartment complexes and housing communities.

The Spencers receive two to four inquiries a day about booking the trolley for an event.

“The word is getting out there that we are now taking on events, and it’s taking off, which is good because we are trying to salvage what we can of this year,” Mike said. “Once some normalcy comes back to everybody’s lives, we look to be running every day for lunch and going back to our original plan doing big events like GenCon, Comic-Con and events with the City of Noblesville.”

Mike learned to cook from his father.

“He was a better cook than my mother, so I picked it up and I’ve always enjoyed it and it led into this,” he said.

The Urban Artisan is a 1985 model 34-foot trolley previously used for tourism. The Spencers bought it through Facebook Marketplace from a man in Peru, Ind. Typically, food trucks are approximately 20 feet long.

“He owned a semi-trailer business and there was a packaged deal with this trolley in with a bunch of semi-trailers, so he bought the whole package and put the trolley up for sale,” Mike said.

The trolley only required minor engine work before it was up and running. Mike said it was difficult to trace its history.

The Urban Artisan primarily travels to events in Hamilton County. 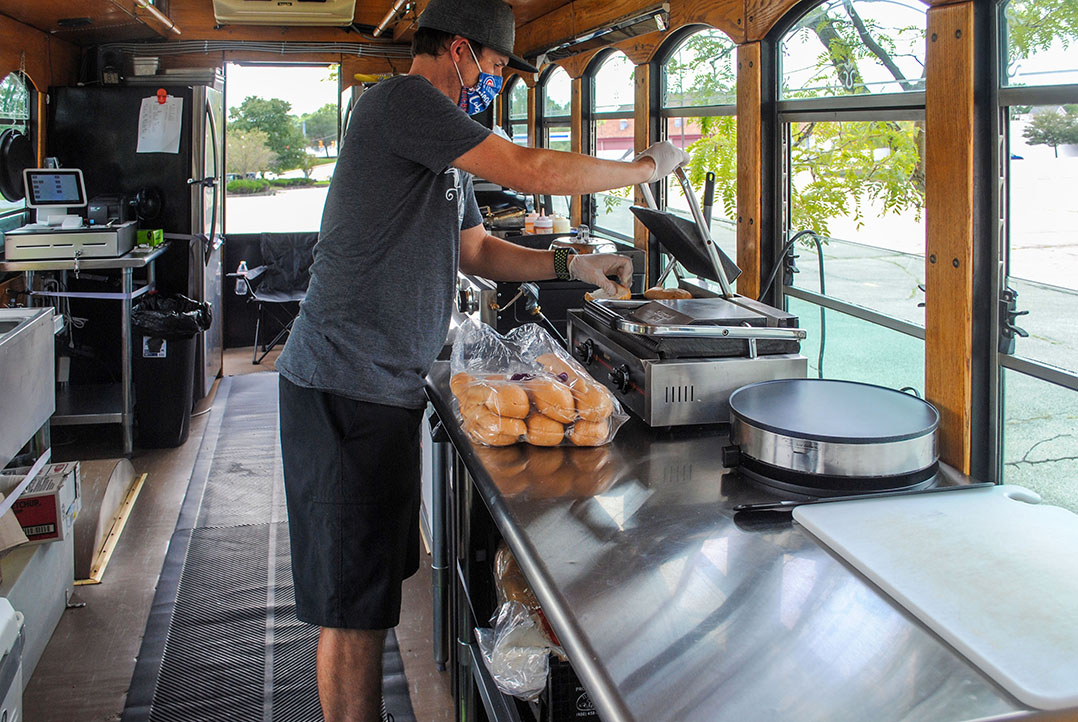 Mike Stacey prepares an order on The Urban Artisan. (Photos by Anna Skinner)

The Urban Artisan specializes in sandwiches and French crepes.

“One thing we noticed in the food truck industry is they do just sweets or just savory, and they don’t do a combination,” said Mike Stacey, a Noblesville resident and owner of The Urban Artisan. “With the trolley being as large as it is, we could offer both. If you have a sweet tooth, we could do that or savory. We have that covered. It opened up our customer base.”