You are at:Home»Current in Carmel»Carmel Cover Stories»Giving through grief: Stillborn son inspires couple to support others experiencing infant loss

The process was familiar, but the emotions couldn’t have been more different for Kathleen and Steven Jeffers as they made their second trip to the maternity ward at Ascension St. Vincent Carmel hospital in September 2018.

It was the same floor at the same hospital where they’d given birth to their daughter, Lyla, 2 1/2 years earlier, a day full of joy, smiles and longing fulfilled.

The hospital room was “dark” and “depressing,” Kathleen said, the absence of a warming bed a constant reminder that the 26 hours of labor would not end as they’d dreamed it would only days before.

“It’s life-changing to hold your child that isn’t breathing and will never take a breath in this world. It was something that gets you to the absolute core of who you are,” Steven said. “I woke up the next morning and had weighing on my heart that this (process) has to be better. It’s already the worst thing someone has to experience in their life, but how can we at least help people get through it?”

Thus, the idea for the Scotty Michael Foundation was born.

Kathleen and Steven met as students at Terre Haute North High School, both graduating in 2006. 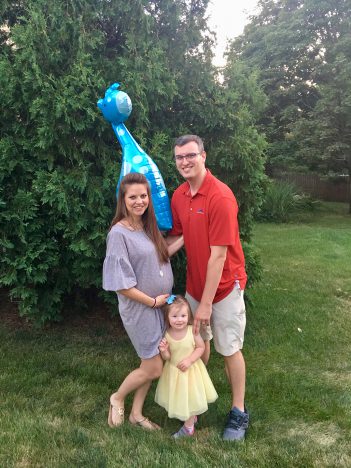 Kathleen, Steven and Lyla Jeffers celebrate after discovering the family was expecting a boy. (Submitted photo)

They married in 2011 and welcomed their daughter five years later after a routine pregnancy. Kathleen’s second pregnancy also was textbook until she went to her 28-week checkup and was shocked to find that her baby boy had no heartbeat.

“It was so unexpected,” Kathleen said. “I felt him moving up until then.”

The medical team was caring and compassionate, the Jeffers said, but once they left for home without Scotty, they felt alone in managing their grief. The hospital gave them a packet of resources, which included information on support groups and funeral homes, but they craved more than that.

Even before leaving the hospital, Steven was brainstorming ways to improve the experience for other families in similar situations. During the next few months, he and Kathleen formed the nonprofit Scotty Michael Foundation and began gathering resources and gifts to be placed in a beautifully decorated box for parents experiencing similar loss.

The boxes include a folder of resource information, a baby book designed for parents experiencing loss, a necklace, a devotional, toiletries and a worry rock for fathers to carry around with them to remind them to breathe and feel companionship.

“The dads get forgotten in this process,” Kathleen said. “Remembering they’re part of this experience and that they’ve experienced loss, too, having something for them is important.”

Serving as a guide

Each box costs $100 to assemble, but they are given to families for free. They are only available at Ascension St. Vincent Carmel, but the Jeffers hope to offer them at other hospitals soon.

Ultimately, the Jeffers want to raise enough funds to be able to pay the hospital bill for visits that end in the loss of a baby. Steven said he remembers receiving his bill on one of the first days he and Kathleen were starting to emerge from their grief, which sent them reeling again.

They’ve also started a support group for women that meets at a coffee shop, and they want to form a group for men to support each other, too.

“These (grief) events are so huge and it’s all at once. You can’t think properly and you’re trying to figure it all out,” said Kathleen, who is training to become a grief doula. “We’re helping to guide couples that go through this into a path that helps them accept the time they have with their baby and may help do some of the figuring out for them, really helping to guide them through the process.” 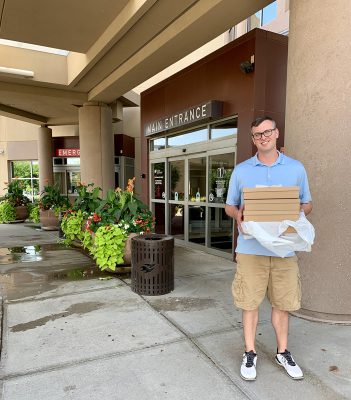 Items in boxes provided by the Scotty Michael Foundation are: