Jane Sullivan knew she couldn’t let her husband Mike Sullivan’s retirement as a Riverview Health paramedic pass without some fanfare — even if he might hate the attention.

“It just came up into my heart that this hospital has been everything to us,” Jane said. “This hospital is where we met, where we got engaged. We got married with all these (Riverview) people having showers and engagement parties for us. When we had babies, they announced it at the hospital. I had to go to neonatal care because I’m a diabetic so I couldn’t have the babies here, but they announced it over the loudspeaker.

“Riverview has been our home for 44 years.”

To commemorate Mike’s retirement, Jane arranged for co-workers, friends, family members, fire engine and ambulance sirens to greet him as left after his final shift Aug. 5 at the Noblesville hospital.

Jane, a respiratory therapist, met Mike in the emergency room.

“We met on a code blue on an infant,” said Jane, who left Riverview in 1993 to pursue a holistic health career. “He was putting an IV in the baby’s head and he was like an artist. That’s when I fell for him. He’s meticulous. You can get a splinter taken out of your foot by Mike and not feel it.” 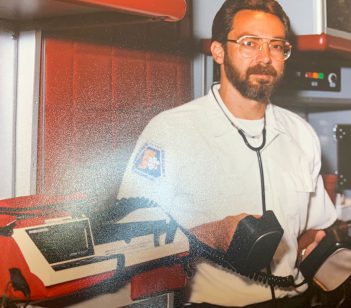 Mike Sullivan demonstrates how to use the first defibrillator on an ambulance. (Submitted photo)

Mike, who turned 66 Aug. 8, said his wife is good at pulling off surprises.

“I had no clue,” he said. “I wasn’t expecting anything. I’ve been blessed. It’s been a great place to work.”

Much has changed in health care during Mike’s career.

“There is so much we can do to extend people’s lives and give them a better quality of life,” Mike said.

Peg McIntosh was Sullivan’s instructor in paramedic school at St. Vincent. McIntosh, a registered nurse for 50 years, worked the last 15 years at Riverview before retiring in January. When she heard about the retirement celebration, she wanted to be there.

“I’d see him because he would be in the ER,” McIntosh said. “He’s always been so nice.”

Mike, the first paramedic hired by Hamilton County, has been an emergency room paramedic for the past 15 years. He spent the 30 previous years as what he described as a paramedic on the street, working out of fire stations.

“He provides great support for the nurses and can do just about anything,” Epperson said. “They (paramedics) think independently on the street.”

Mike Sullivan decided he would retire early in 2020.

“I had no idea COVID would hit,” he said. “It’s been a challenge for all of us.”

His wife, Jane, said the pandemic made for a tough end to her husband’s career.

“He said he just wanted to get to the finish line with COVID five months ago,” said Jane, who set up a finish line to cross when Mike left his last shift at work. “We practiced social distancing for the last five months.”

They shared their first hug in five months after his shift.

It has been tough on Mike to watch people not to be able to visit their loved ones.

Mike said he’s had a fulfilling career, but the time is right to retire.

“I’m ready to leave it to the younger folks,” he said.

The Sullivans bought a camper to enjoy during retirement.

“We have all the bikes and kayaks,” Mike said. “We’ll be visiting the national parks and every other park we can find.”