Holladay Properties Senior Vice President Chris Wilkes realizes running out of land in the NorthPoint development in northern Westfield is a good problem to have. That’s why he’s conducting a rezone process to add 180 acres to the business park north of Ind. 38.

Abbott Labs is expected to open in 2021. (Submitted rendering)

So far, the 300-acre business park has been the site for several developments, including Bastian Solutions, recently acquired by Toyota Advanced Logistics, at the northeast corner of U.S 31 and 196th Street. The company specializes in advanced manufacturing. Bastian Solutions has been operating in its new building for more than a year. Buildings for Abbott Labs, a Fortune 500 pharmaceutical company, and Gordon Food Services, a food distribution and processing facility, are under construction. Browning Chapman, a specialty materials contractor, relocated its headquarters to NorthPoint I and opened in the spring.

A little more than126 acres remain in the original plot.

“We’ve had a lot of really good success at NorthPoint,” Wilkes said.

Construction on the East Street extension will begin this fall from 196th Street to Ind. 38 and will lead to an improved transportation network through the development and, possibly, draw further interest from companies. Wilkes expects the remaining acreage to go fast.

“Well, just those handful of tenants can consume a hundred acres,” Wilkes said of the land already claimed by companies. “We hope that in the course of a couple years, we could fill these parcels up with similar type of tenants, hence the reason to look at NorthPoint II.”

“From our perspective as the developer, we are really happy (with the interest), but as a Westfield resident for nearly 20 years, I think it’s tremendous to see this type of corporate investment in Westfield,” Wilkes said. “These are really big companies. Abbott Labs is internationally known, and so is Toyota and Gordon. In every case, those were regional searches. They were looking at other locations besides just Westfield. I think it’s awesome Westfield is starting to attract that corporate investment that arguably has been lacking. I think most people would agree toward developing our community and developing a more balanced tax base spread beyond the largely residential and service industry and expanding the corporate tax base, attracting jobs. That’s exactly what the city’s been seeking to do for quite a while now. I do think NorthPoint is serving as a geographical home to that strategy of attracting.”

“We are proceeding at a very modest pace,” he said. “Our hope is to get the rezoning completed by end of this year.”

Currently, if a company were to seek more than 100 acres for a development, NorthPoint I could not fill that need.

“We cannot accommodate that within our current inventory,” Wilkes said. “If Westfield has an opportunity to pursue a significant project like that, it’s really important in the for a competitive landscape within Hamilton County, let alone the Indianapolis region, to have sites that are ready to go. If a corporate user were to show up today and say, ‘I’m looking for 80 to 90 acres to bring a $500 million facility, we have to tell them we have to move through a rezone process that could take 60 to 90 days, which is enough time to lose a deal. The construction season is six to eight months, so if you catch it on the wrong side and are locked out until March of next year, it really puts you at a disadvantage.” 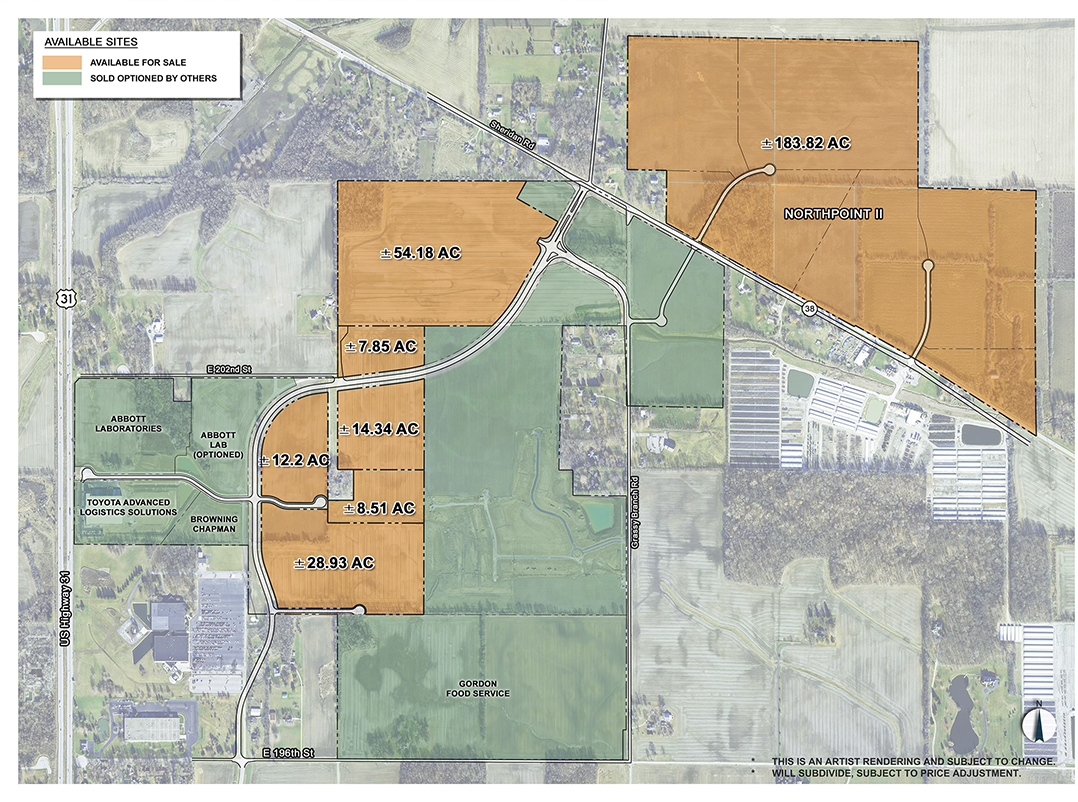