You are at:Home»Current in Fishers»Fishers Community»All-Star Majak achieving hoop dream

Hamilton Southeastern High School senior Mabor Majak has come a long way in his development on the basketball court in four seasons. 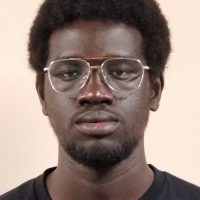 “Mabor continued to get better through his high school career,” Royals coach Brian Satterfield said. “He was frail when he started but has continued to work on his strength and game to vastly improve. Early in his career, it was the inconsistency that kept him from being great. This year, he started showing what he was capable of and really shined this season. He was always a key piece for us on the defensive end, but this year he really improved on the offensive end.

The 7-foot-1, 230-pound Majak, who has signed to play for Cleveland State, averaged 11.4 points, 10 rebounds and 2.6 blocked shots per game his senior year. That earned a spot on the Indiana All-Star team. The games against Kentucky, set for June 5-6, have been canceled due the coronavirus pandemic.

“It’s sad,” Majak said of the games being canceled.

Majak had averaged 8.4 points and 5.7 rebounds as a junior

Majak arrived in Fishers in 2015 from then war-torn South Sudan to live with Michael and Lisa Fox. Michael Fox is co-director of Indiana Elite AAU Basketball Association.

“This season was all about growing as a player and a person,” Majak said. “That’s what I set out to do and that’s what I did.”

Majak said he was more vocal as a leader during workouts and practice as a senior.

“When the older players left, I had to step up,” Majak said.

“He came to practice every day with the workman’s mentality,” he said. “He led by example and is a great team leader. As I have told others, he will start to shine at the next level as he grows into his body and gets stronger.”

Majak said he expects to add 20 to 25 pounds in college.

Majak said when the time is right, he will return to South Sudan to have a short visit with family because the civil war has ended.

“Right now, I’m here achieving my dreams,” Majak said. “I feel blessed. Not a lot of kids where I come from have this opportunity to chase their dreams. I have a lot of cousins back there who say, ‘I wish I had that opportunity.’”