Where to go: Rise’n Roll Bakery

What to get: Crunch Bismark 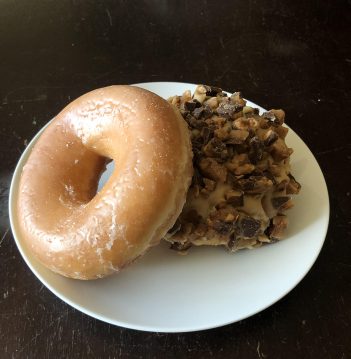 A Crunch Bismark doughnut and a plain glazed doughnut from Rise’n Roll. (Photo by Anna Skinner)

Anna’s take: Let me preface by saying I despise people who take to social media to complain about a restaurant without consulting management first, and I’ve never had to write a negative review, whether restaurants knew I was coming or not, and I have been excited to try Rise’n Roll Bakery, a bakery started by an Amish couple in Middlebury famous for its cinnamon caramel doughnut. A location recently opened in Fishers District, and I thought I’d give it a go.

I ordered one cinnamon caramel doughnut, one Crunch Bismark doughnut and a pack of three cowboy cookies. I arrived, paid and ate one cookie in the car. It was amazing. Upon arriving home, I realized I had been given a plain glazed doughnut instead of a cinnamon caramel crunch. I ate it, and it was good, but I remind everyone to check their bags before rushing home to stuff their face with doughnuts. That said, I definitely would return to Rise’n Roll because I still haven’t tried that famous cinnamon caramel doughnut.