You are at:Home»Current in Noblesville»Noblesville Cover Stories»Excellent expansion: Riverview unveils new and improved infusion center based off patient feedback

More than three years in the making, Riverview Health’s newest upgrade is one that pulls at the community’s heartstrings.

The Courtney Cox Cole Infusion Center opened last month. It is named after Cole, who died Sept. 22 at age 48 after a 5 1/2-year battle with nonsmokers lung cancer. 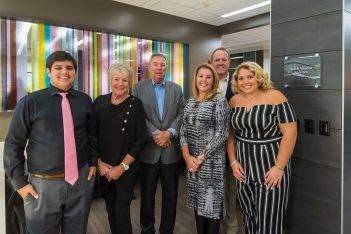 When Cole was first diagnosed with cancer in 2016, she was treated at Riverview Health’s former infusion center. Cole, who co-owned Hare Chevrolet with her sister Monica Peck, was a former standout basketball player and golfer at Noblesville High School and later played both sports at Indiana University.

“The old center was an interior room of the hospital. No windows to the outside world, or even to a hallway,” Wiles said. “In the old center, patients were sitting in their treatment chairs, one basically right next to another. For the family members who were coming along to spend that time with them, there wasn’t a whole lot of privacy or space for them, either.”

Around that time, Cole, her family and several other patients offered suggestions to hospital leadership how the center could be improved.

“(Riverview) really took a look at what they could start to do to make those improvements, to make it a better experience for the patients,” Wiles said. “Care has always been outstanding, and everybody loved the nurses. It just wasn’t a wonderful physical environment.”

Because of other projects – like implementation of a new electronic medical records system in 2017 and the new Westfield hospital opening in 2018 – the infusion center project was pushed to 2019, something Wiles said was actually beneficial.

“It gave us more time to sit and evaluate the designs and features,” she said. “Some of the patients who had been making recommendations, we would take the designs to them and get their feedback. Staff got a chance to have input to it as well.”

With more than 1,000 patient visits each month, the infusion center provides chemotherapy, blood transfusions, IV antibiotics and treatments for gastrointestinal disorders, among other patient services. Treatment times range from an hour to up to eight hours.

The infusion center is at north end of the hospital. It is a multi-area facility that allows each patient an option of environment when receiving treatments.

“We now offer what we call our social treatment areas, so if you’re having a good day and you want to hang out with other people, you can do that,” Wiles said. “Then we’ve got semi-private rooms that are next to the windows, and those have fireplaces, TVs and bench seating for family members. A majority of the patients have heated, massaging treatment chairs. We also have several private rooms with beds.”

Riverview Health Foundation’s commitment to raise $1 million for the approximately $3.5 million overall project is under way, Wiles said. In early November, the foundation hosted a masquerade ball fundraiser, which generated more than $175,000 in donations, all of which will go directly to the infusion center.

After Cole’s death, Wiles said the foundation received $60,000 in her memory from more than 250 individual gifts. In June, the Cox, Cole and Peck families also made a donation of $500,000 to directly benefit the construction of the new infusion center.

“As Hamilton County continues to grow, Riverview Health wants to continue to be able to meet the needs of that growing population,” Wiles said. “Sadly, this is one of those areas in the hospital that has seen an increase in patient numbers. We want to be able to provide an environment where people wanted to go. People don’t want to have these types of treatments, but when they have to, why not provide it in a space that’s appealing?”

While the interior is complete, a garden and sculptures will be installed outdoors when warm weather returns.

“We’ve been working with Nickel Plate Arts, and they helped us identify a local artist to create that (sculpture),” said Megan Wiles, executive director of the Riverview Health Foundation. “The artist, Rachel Kavathe, is working in conjunction with our landscape architect. The design she has come up with is four segments so that from any of the rooms with the windows, there’ll be a vantage point to the sculpture. The garden will be built and the sculptures installed, hopefully, in the spring.

“We will continue to raise money for this project. It’s just one of those things that speaks to people, and the community will be happy to continue to support with gifts made in (Cole’s) memory. Since Courtney Cox Cole’s passing, the number of memorial gifts and the amount of money that we’ve raised from that unfortunate situation has been tremendous.”