Developer Birch Dalton has a grand plan. He determined a development he originally planned for Ind. 32 is a better fit for land near Grand Park. He plans to develop Laser Flash, a driving school, a possible jump park and acreage for a world-class public observatory, digital planetarium sky theater and space science center under Link Institute.

The nearly $20 million development encompasses 68 acres in the southeast quadrant of Tomlinson Road and 191st Street. A community entertainment center would include a 45,000-square-foot Laser Flash with a full restaurant and outdoor eating area, a 90,000-square-foot Jay Howard driving school and race shop, a 60,000-square-foot facility with a two-level indoor electric go-kart track for recreational use. 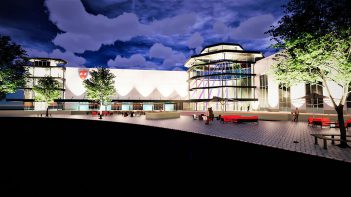 The community entertainment center will include Laser Flash, a driving school, go-karts and more.

“We (also) have planned for an outdoor go-kart course,” said Dalton, managing director for EdgeRock Development in Westfield. “What makes that unique is that if you look at north elevation of the building, two doors open up so people will start indoors, go out and come back.

“What we’re looking for here is to take advantage of the Grand Park crowd and the community.”

A hotel and public park is planned for the southwest quadrant of Tomlinson Road and 191st Street.

Dalton said no other companies have announced plans to open in the community entertainment center so far, but he anticipates constructing a 25,000- to 30,000-square-foot jump park.

Out of the 68 acres available, Dalton will sell 55 to Link Institute, which plans to construct a $32 million, 105,000-square-foot observatory, digital planetarium and space science center called the Astronaut David Wolf Observatory. It will feature a twin dome public observatory with 30-foot domes for public use and educational opportunities for students. It will have a 30-foot diameter radio telescope and mission control rooms to allow students to engage in science projects in astrophysics.

The digital planetarium sky theater will be 70 feet in diameter, which would make it largest in the state. It will have 250 seats and will display a hyper-realistic view of planets, star clusters and galaxies.

Dalton said part of the reason the development moved closer to Grand Park is because of the Link Institute partnership.

“(We had planned) Laser Flash to go down on Ind. 32, but just because of the sheer cost advantages of coming up here and partnering with Link, because of their likelihood of driving a lot of tourists and the proximity to Grand Park, it made better sense to leave Ind. 32 to a higher-end development,” Dalton said. “I could build this project up here, fill a community need and then when the Link opportunity came up, it’s just a home run.

“The opportunity Link provides this community is a rare chance to do something totally different, and it fulfills our goal of tourism and all the things we said we were going to do as a community as we invested in Grand Park.”

The Astronaut David Wolf Observatory will include a digital planetarium, space science center and have twin 30-foot domes.

For the community entertainment center, developer Birch Dalton plans to have zoning completed by February, a detailed development plan complete in March and begin construction in April. Portions of the center will open by late 2020.

The Astronaut David Wolf Observatory is a different story. Link Institute must raise the funds before it can be constructed. Link Institute Director Greg McCauley is targeting a first quarter 2024 opening.

“The reason for that is, No. 1, we think that’s doable, and No. 2, 2024 is scheduled to be the time at which NASA’s Artemis mission back to the moon will occur,” McCauley said. “To be able to tie in a grand opening for Grand Universe with landing astronauts on the moon after 50 years would certainly be something worth focusing on.”

Link Institute is in the fundraising phase now. To donate, email gmccauley@linkobservatory.org.