Ressie Lemmon likes to compete, and she likes to win. Those are two of the reasons the 9-year-old plays golf.

Lemmon, a Fortville Elementary School third-grader, recently shot a 93 at the Regional Qualifier in Oakland Hills, Mich., which advanced her to the Drive, Chip and Putt National Finals in Augusta, Ga., on April 5, 2020. 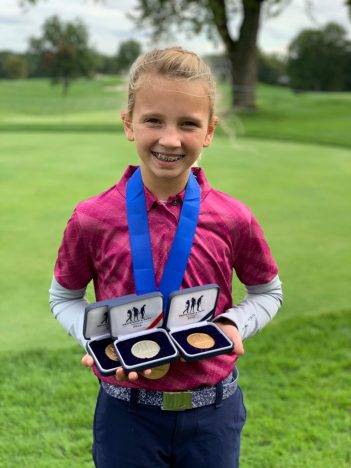 Ressie Lemmon shot a 93 at the regional qualifier in Oakland Hills, Mich. She will play again in April in Augusta, Ga., in the nationals. (Submitted photo)

Lemmon has played golf for two years and was inspired when her older brother, Elijah, began playing. Competing is her favorite part of the game.

Golf is in Lemmon’s DNA. Her maternal grandfather, Tom Kirby, played golf and now caddies for Elijah. Lemmon’s father, Adam, caddies for her.

“We are a very sports-centered family, and not that we like to watch sports. We don’t sit down on weekends and watch football or basketball games, but we are more active,” Lemmon’s mother, April, said. “Ressie got started at a very early age. Her first sport really was soccer.

“Then her brother is a golfer. He’s older than her, and she saw the time he put into it once he got competitive. She saw the time he got from his parents and grandpa, and I think she really wanted to be a part of that.”

“Golf has been really good for (Lemmon) and all of our kids since it is individual. They learn a lot about themselves on the course because there’s no one else to blame, so they have to work through any adversity themselves,” April said. “Ressie, she likes competing. She competes with her siblings in everything she does, and in everything she does, she wants to do the best she can.”