A historic building just a few blocks off the downtown square soon will be the home of the Noblesville Preservation Alliance.

Last month, the nonprofit purchased the building, most recently known as Logan Street Sanctuary at 1274 Logan Street, for its headquarters. It is now called Preservation Hall.

“I think (previous owner John Gilmore) was just tired of the management part of it and being responsible for the building,” NPA Vice President Sandy Stewart said. “He did an incredible thing for the community by getting the ball rolling and getting music started in this space. He wanted it to go to someone who would continue some of the things that were going on here.”

Logan Street Sanctuary, a nonprofit that has since rebranded as Community Education Arts, Inc., in recent years has held performances by local musicians and comedians in the building, which they rented from Gilmore, in addition to managing the annual book publishing Polk Street Review, the Noblesville Interdisciplinary Creativity Expo and other activities.

Now, NPA wants to open the space more by making it a home base for its public events, like the annual historic home and holiday home tours and NobleStories, and members-only events, such as movie nights, cookouts and resource events that range from project-based workshops for members to fix up historic features of their homes to classes on researching a home’s history.

“Another one of the ways we’re going to support the building is by renting it out to the community,” Stewart said. “We’re hoping to have weddings and other types of parties and celebrations here. We’ve been really looking at the types of events we can bring here because we now have a dedicated facility.”

NPA made the purchase official Oct. 15 and is applying a $75,000 endangered structures loan from Indiana Landmarks to help fund renovations and changes to the building.

“That loan carries a covenant that the building can never be torn down and that we have to restore the exterior as much as possible,” Stewart said. “It’s interest-free for one year, so we are kicking off a fundraising campaign where we’ll have naming opportunities in the building where you can name a pew, window or tables. So, it’s really important that we raise $75,000 in a year.”

“We’re going to renovate the whole outside eventually,” NPA Treasurer Mike Corbett said. “That’s one of the things that Indiana Landmarks is requiring, for us to renovate the outside and try and restore it.”

Although some outside work has already begun, a majority of the renovations have been to the building’s interior – such as removing walls in the basement, painting, cleaning, and adding décor.

Besides having a place to call home, Preservation Hall solves many logistical problems for NPA.

“On the past couple of years during our holiday home tour, people (whose houses are on the tour) have served food in their homes,” Stewart said. “Instead of doing that in each home, we’ll have the party at Preservation Hall. We’ll decorate and have everyone start the tour here. We also used to pay to have NobleStories here, and we also now have a dedicated meeting space with this building. City Hall has been very good to host us, but there have been times where they’ve needed that space, but the biggest thing is storage.”

“Our stuff is spread all over the city in basements, garages, in the interurban building at Forest Park and in the basement of Noblesville Main Street,” Corbett said. “This building will allow us to consolidate that.”

Overall, the NPA mission of saving and preserving historic properties falls perfectly in line with its move into the building. Because it sits among single-family homes in a downtown residential, when ownership changes, it has always been at risk of being lost or becoming something other than a gathering space for the public.

“This building was a church for a long time, but before that, it had been an Army barracks in Ohio, and it was moved here on the railroad in 1938,” NPA board member Dottie Young said. “Then, it was a couple of different churches, and the last one was the Logan Street Pentecostal Church (now on South 10th Street).”

More than three decades old, NPA was founded when Noblesville’s historic Craig House was in danger of being torn down. The organization worked to save the home, moving it across the street at 1250 E. Conner St. NPA also has been an integral part of preserving and renovating other historically significant Noblesville features, including Potter’s Bridge and the Sheriff’s Residence and Jail on the downtown square. The organization also offers a façade grant program, a Century Plaque program for homes more than 100 years old and other awards programs.

“This organization has done extraordinary things for the last 33 years, all volunteer with no real home base until now,” Stewart said. “When I first joined, I was amazed at what this group has been able to accomplish. Any volunteer organization is vulnerable to the winds of change, but this will give us some stability and help ensure its long-term viability because this is a really important organization for the community, and it shouldn’t go away.”

Learn more, or donate at noblesvillepreservation.org. 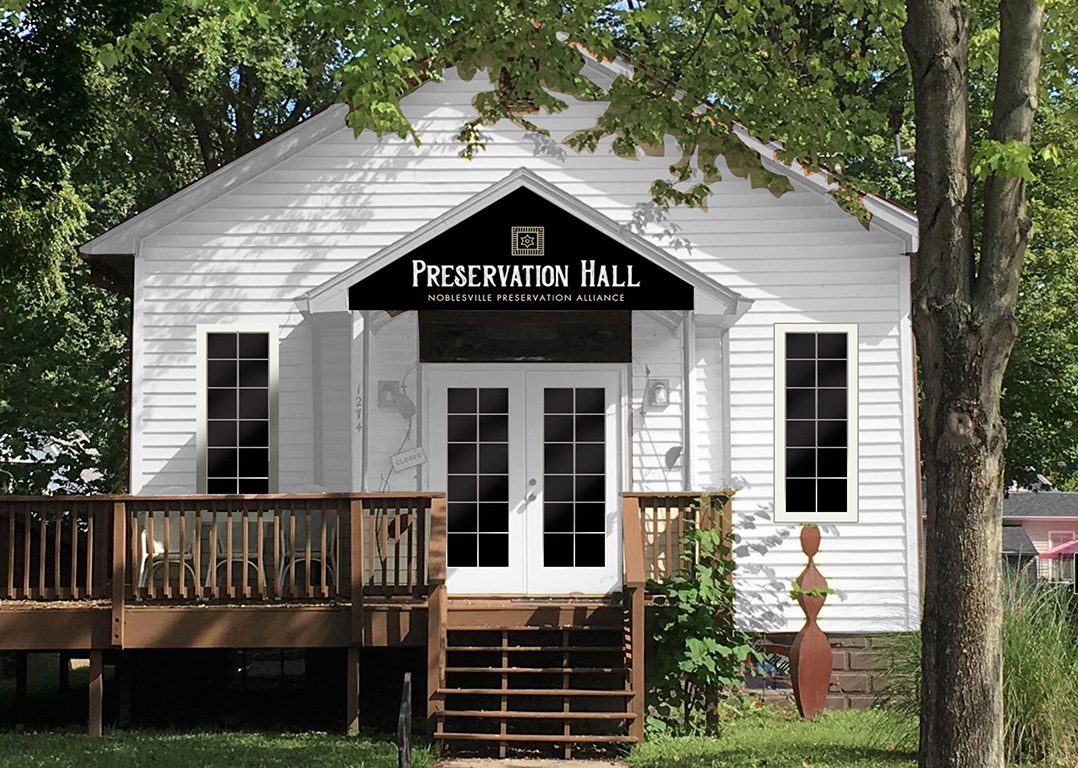 Rendering of the proposed changes to the exterior of the 1274 Logan Street building. (Submitted rendering)

What: The Noblesville Preservation Alliance is inviting the public to the new Preservation Hall for tours and to see changes that have been made so far. Music and refreshments will be available.