You are at:Home»Current in Geist»Geist Cover Stories»Writing on the weird and wonderful: Geist author publishes new book with Reedy Press

After spending 15 years as a freelance food and drink writer in the Midwest, Geist-area resident Ashley Petry was thrilled when Reedy Press, a publishing firm, approached her about writing “100 Things To Do In Indianapolis Before You Die.”

Reedy Press also approached Petry about writing another book, “Secret Indianapolis: A Guide to the Weird, Wonderful, and Obscure.” It was published this year.

“It includes weird stories from Indiana’s history, forgotten heroes from Indianapolis, weird museums and things to do,” Petry said.

“It also gave me an opportunity to talk about places like Rhythm! Discovery Center, a percussion museum downtown, the Holcomb Observatory at Butler University and a lot of wonderful cultural aspects people just don’t know much about,” she said.

One of her favorite stories from the “Secret Indianapolis: A Guide to the Weird, Wonderful, and Obscure” is about Martin Van Buren, the eighth president of the United States.

“In the early years, Indianapolis was hugely dependent on U.S. 40,” she said. “We didn’t have a navigable waterway and trains hadn’t arrived yet. During Martin Van Buren’s presidency, federal funding for what is now U.S. 40 was cut off. A lot of Hoosiers held a grudge about that, so a couple of years later Van Buren was trying to drum up support for another presidential bid, and he decides to do a campaign tour on the national road. When he comes through Indiana and gets to Plainfield, the people of Plainfield are still mad and decide to show him how bad the road can be.”

Plainfield residents bribed Van Buren’s carriage driver to give him a rough journey.

“When he gets to Plainfield, he goes racing down a hill and over the roots of a huge elm tree which tips the carriage. Martin Van Buren goes tumbling into a mud puddle,” Petry said. “They erected a plaque at the Van Buren elm to commemorate this strange presidential prank. The original tree is dead but there’s a new tree there.”

“I get to work from home and I get to travel,” she said. “I couldn’t imagine anything better.”

Petry will publish another book about Indianapolis, through the same publisher, in fall 2020.
“I can’t talk about details yet,” she said. 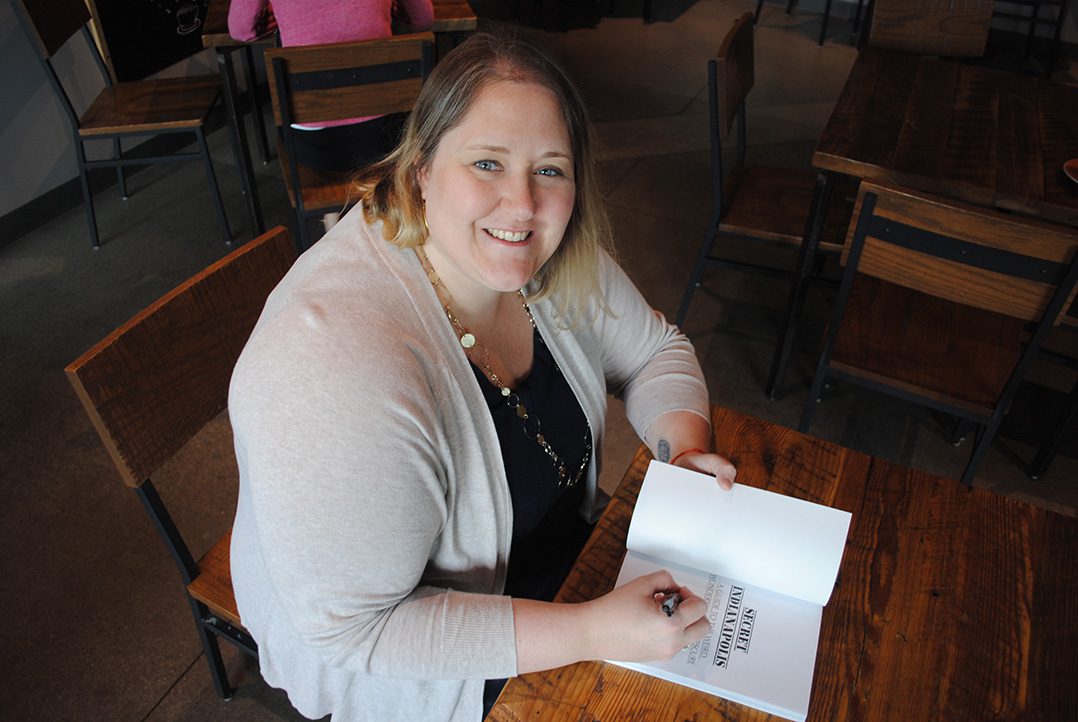 Author Ashley Petry signs copies of her new book, “Secret Indianapolis: A Guide to the Weird, Wonderful, and Obscure.”

What a typical day looks like: “I have a sleep disorder, so a lot of my work gets done at night. And that’s nice because I can write without being interrupted by phone calls and emails,” Petry said. She sleeps during the day.

How she takes her coffee: Always decaf, generally a caramel macchiato

Last book she read: Currently in the middle of “Anna Karenina”

What she does in her free time: “I do a lot of reading memoir, and I also have a weird obsession with quantum physics, so I read a lot of books about that and fiction as well.”

Favorite place she’s traveled (has visited 41 countries): “We went to Italy on our honeymoon, and that was my first foreign trip, so that will always have a special place in my heart.”