You are at:Home»Current in Fishers»Fishers Cover Stories»Music of the mountains: Trio plays dulcimers weekly at The Well, wants to attract more members 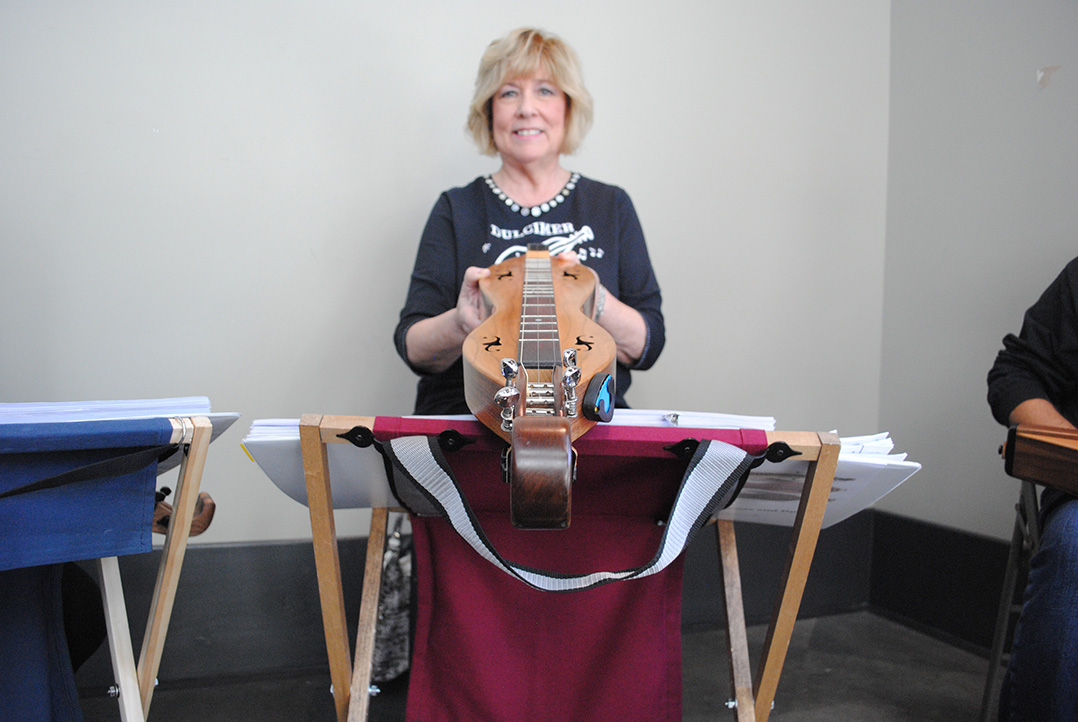 Sojna Widmer displays her dulcimer, which is made of black walnut, butternut and Wenge wood. (Photos by Anna Skinner)

Fishers resident John Lude grew up in the foothills of the Appalachian Mountains, so he’s familiar with the folksy music of the dulcimer – a three-stringed instrument made of wood.

“When I was little, the only neighbor we had was my grandparents,” he said. “My grandma would sing traditional folk songs, so the first time I heard a dulcimer, I recognized the songs right away. They reminded me of my grandma.”

Now, Lude keeps the music of the mountains alive by performing with Sojna Widmer and Dorrie Keyes each Tuesday at The Well Coffeehouse in Fishers. They call their band Dulcimer Dames and Dudes.

Lude, Widmer and Keyes met when they took dulcimer lessons 2 1/2years ago. They play at The Well from 3:30 to 5:30 p.m. each Tuesday. They also perform at the Fashion Mall during the Christmas season and at senior-living facilities throughout the year.

MUSIC AND THE AGING BRAIN

Widmer, a Carmel resident, first heard about the dulcimer from a high school friend in Evansville.

“I had never heard of a dulcimer,” she said. “I quickly fell in love with the history and sound of the instrument.”

Widmer also said she learned that as people age, their reaction time slows and they lose mental ability. Learning to play an instrument slows the process.

“Science also has shown that musical training can change the brain structure and function for the better,” Widmer said. “It can improve long-term memory. According to researchers at the University of Montreal, musicians tend to be more mentally alert. That all sounded really positive to me.”

Because the dulcimer has only three strings, Widmer mistakenly assumed it would be easier to learn than other instruments.

“I have found over the years it is not as easy as I had thought, but I have greatly enjoyed the challenges and the people I have met,” she said. 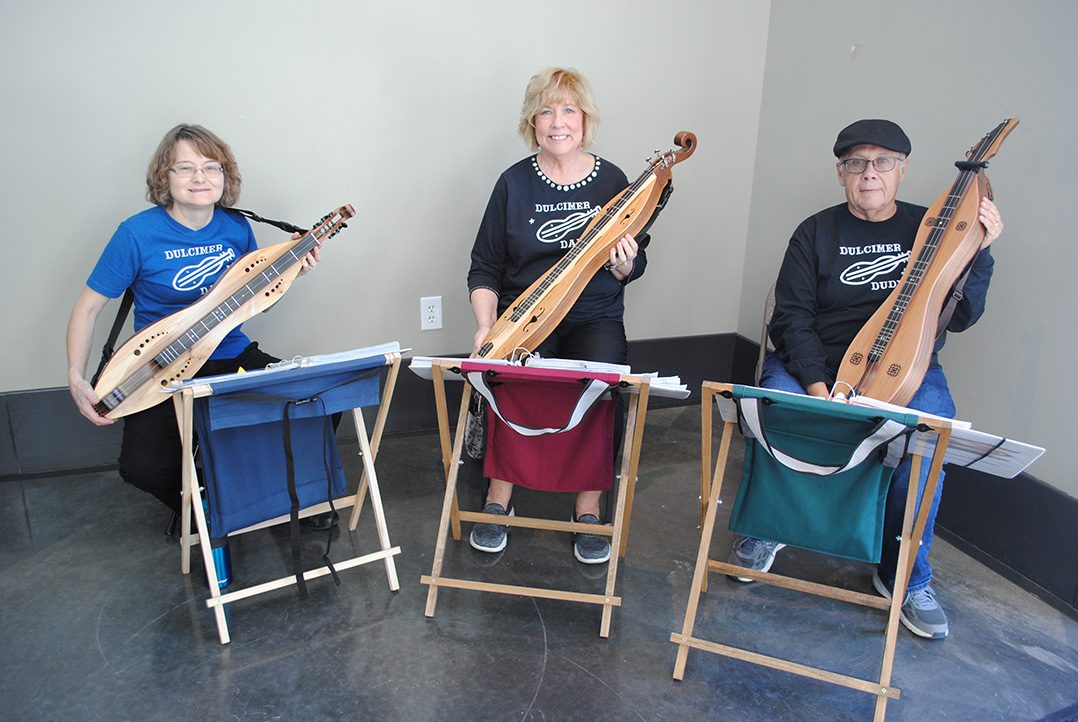 From left, Dorrie Keyes, Sojna Widmer and John Lude make up the Dulcimer Dames and Dudes.

PLAYING TOGETHER FOR ACCOUNTABILITY

Keyes, a Fishers resident and the only non-retiree of the group, said she’s always been interested in traditional folk music. When she first saw a dulcimer at a folk music festival in Michigan, she thought the instrument would make a good gift for her husband.

“I bought him one off Craig’s List, but I ended up playing it because it was so much fun and easy to learn,” Keyes said.

Keyes joined the Dulcimer Dames and Dudes band shortly after seeing them play at The Well Coffeehouse.

“Having a regular group to play with helped me be accountable to practice regularly,” she said. “I’ve learned so much from the other players to make me a better musician.”

The Dulcimer Dames and Dudes originally consisted of six dulcimer players but now only has three. Lude, Widmer and Keyes are open to adding more musicians, including non-dulcimer players. 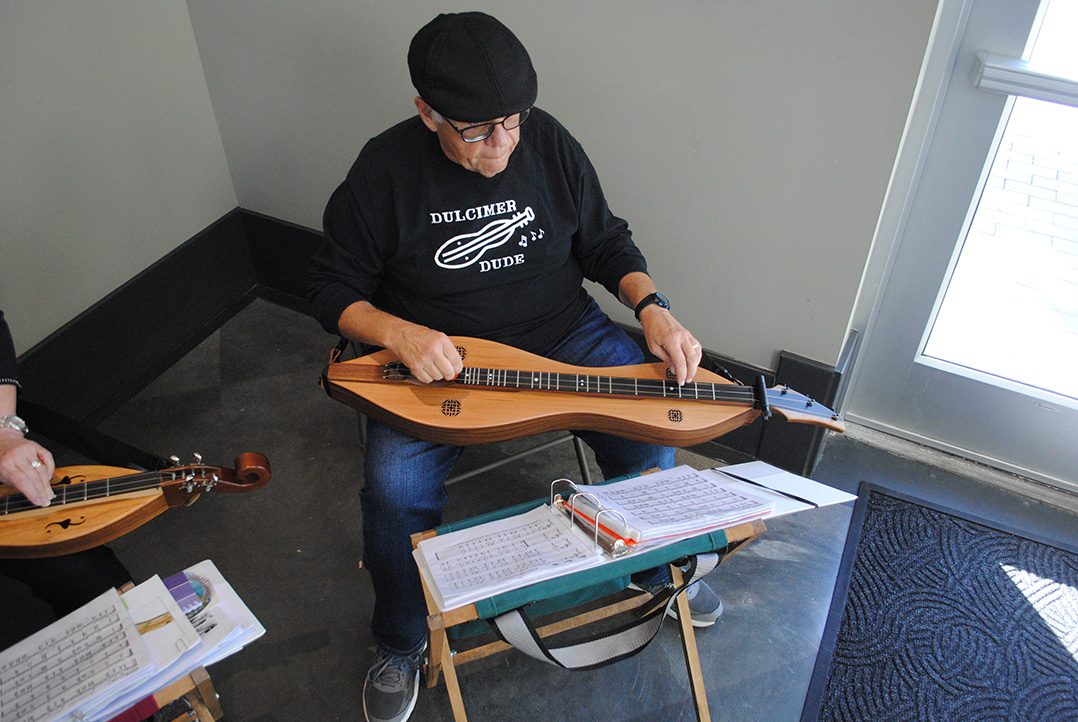 “This is my retirement learning,” Lude said, laughing.

Most music stores don’t sell dulcimers because they’re a specialty instrument. However, many places in Brown County sell them.

Later this month or early November, the trio will start performing at the Hamilton East Public Library at 5 Municipal Dr. in the Ignite studio. That’s because the shorter, cold days of winter makes playing in the lobby near The Well Coffeehouse difficult.

The band will continue to practice, which they refer to as jamming, at the library until the weather begins to warm again. The trio will return to The Well Coffeehouse in April 2020.