With the goal of bringing public art to Zionsville, the Zionsville Cultural District has commissioned local artists to paint traffic boxes around town. 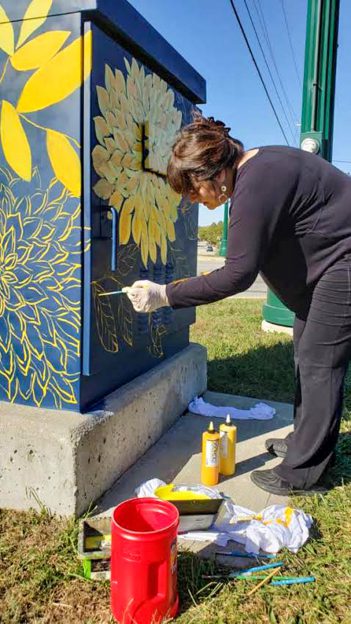 Cynthia Young, Zionsville’s SullivanMunce Cultural Center executive director, works as an artist in her spare time and was commissioned by the ZCD to paint an electrical box at 106th Street and Zionsville Road. She is contracted to finish by Oct. 31.

Young said artists are identified and invited to submit designs to the ZCD, which then submits them to the Public Arts Committee, which reviews artists and designs before presenting them to the ZCD board for approval.

“The ZCD requested that my painting be related to the dahlia, since we used to be known as the ‘Dahlia City,’ and it is close to the street that bears the dahlia name,” Young said. “I selected yellow dahlias because there was once a lemon-colored, award-winning dahlia from Zionsville.”

Mark Zelonis, a ZCD board member and chair of its Public Arts Committee, said the the effort is an attempt to draw attention to Zionsville’s tradition for being called “Dahlia City,” which it was commonly known as throughout 1920s and ’30s.

“We hope to call attention to this wonderful chapter in the village’s history,” Zelonis said. “Earlier, a new street was named ‘Dahlia Way’ in recognition of it, and the chamber of commerce annually presents a local business employee with its Dahlia Award. We hope the town will consider using dahlias in some of its new planters on Main Street and elsewhere.”