You are at:Home»Current in Westfield»Westfield Community»Legacy Oaks to replace controversial ‘Landings’ project

After a large amount of negative citizen feedback, developers of a mixed-use housing and commercial project have changed plans and now propose a single-family housing project in its place. The new plan was presented at the Oct. 21 Westfield Advisory Plan Commission. 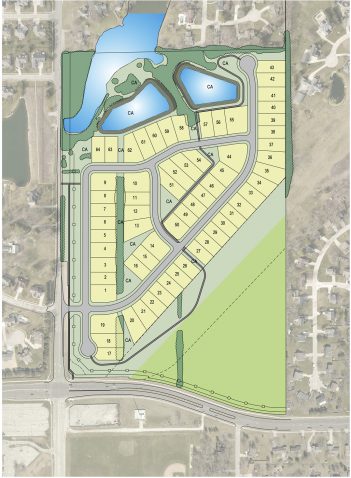 The Legacy Oaks project, formerly known as The Landings at Village Farms, could bring between 64 and 67 homes to the northeast corner of 146th Street and Oak Ridge Road. (Submitted map)

In August, Pulte Homes of Indiana proposed building 94 homes in addition to commercial outlots, a project originally known as The Landings at Village Farms, at the northeast corner of 146th Street and Oak Ridge Road. The project proposed a mix of one- and two-story homes ranging in price from $325,000 to $360,000 and rezoning more than half of the overall development for commercial buildings.

Now, the plan has changed to remove the commercial portion of the project and reduce the number of homes proposed from 94 to 64 with a new name, Legacy Oaks.

With the reduction of homes, lot sizes have increased by more than 50 percent from original plans, but Pulte still wants to rezone a portion of the property, which, if approved, would change from single-family, low-density to single-family, medium-density.

The proposed homes also have changed, with Pulte making the decision to have only one-story homes targeted for empty nesters rather than families with children. The homes will range in price from the mid-$300,000s to low the $400,000s.

“I want to compliment (Pulte Homes) on the improvements that have been made to this project since it first came to us and their involvement with the community and neighbors,” Commissioner Bob Smith said at the meeting.

The plan commission voted 9-0 to send the rezone request with a positive recommendation to the Westfield City Council, which will give final approval.