You are at:Home»Current in Westfield»Westfield Cover Stories»Grocers on the grow: Meijer works through planning process with city for store at Spring Mill Road and Ind. 32

A long-awaited grocery store is finally taking steps to approve its building and the surrounding outlots with the City of Westfield in order to build on the southeast quadrant of Spring Mill Road and Ind. 32.

Meijer purchased the 33-acre property in April 2016, but residents have heard little on when the company actually planned to build.

Now, Meijer is working through the planning process with the city and has appeared several times before the Advisory Plan Commission. The company is currently going through the approval process for a zoning amendment, a detailed development plan and a secondary plat. 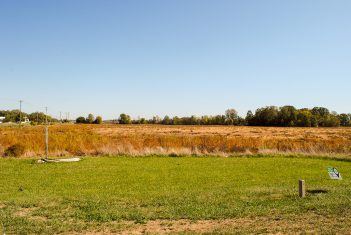 A 160,000-square-foot Meijer grocery store is proposed for the southeast quadrant of Ind. 32 and Spring Mill Road. (Photo by Anna Skinner)

“(The detailed development plan) is the building review, and then the secondary plat further subdivides the lots within the area,” city planner Caleb Ernest said.

The primary plat and overall development plan originally were presented at the Sept. 16 plan commission meeting, and that proposal establishes the boundary lines and right-of-way. The zoning amendment is required to advance through the approval process because the planned unit development, the Maple Knoll PUD, where the store is set to be built, was created in February 2004.

“At that time, a Meijer was not contemplated within that zoning, even though this area in the PUD was envisioned for employment,” Ernest said. “The zoning calls for an employment district, but some of the standards did not accommodate the scale of a Meijer store. The change of zoning amendment (from Meijer) is asking for additional signage that is not currently permitted and architectural materials that are being modified.”

A 160,000-square-foot Meijer grocery store is proposed for the southeast quadrant of Ind. 32 and Spring Mill Road. (Submitted rendering)

“They (Meijer) have to work through a lot of revisions through our community development team, and I’m sure the (city) council has questions as well. We are watching the process unfold,” said Vicki Duncan Gardener, the city’s communications director. “Several of the council members, rightly so, have talked about this (corner) as our (city’s) front door. We want to make sure (Meijer) adheres to what (planners) are telling them. It is going to be a very visible location.”

If approved, in addition to constructing its store and gas station, Meijer also would add a portion to the Midland Trace Trail, which spans the southern border of its property.

“The trail comes in from the east and then jumps south and cuts behind (Meijer’s) property and jumps back up north. There’s no trail in the spot (behind Meijer). They’re going to create it,” Duncan Gardner said. “The trail ends on the west side of Tractor Supply.”

Meijer’s portion of the trail would be approximately a quarter mile.