You are at:Home»Current in Noblesville»Noblesville Cover Stories»Making room: Hamilton County Jail addition to open this week

This week, inmates at the Hamilton County Jail will be shifted to a new facility add-on that nearly doubles the space of the jail. 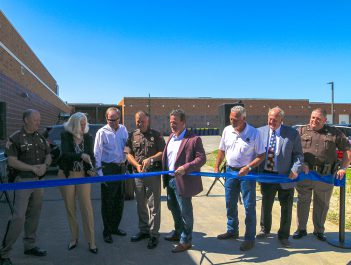 On June 28, Hamilton County officials cut the ribbon on the $13.5 million, 40,000-square-foot expansion at the correctional campus on Cumberland Road after more than a year of construction.

The expansion adds 120 beds in 38 prefabricated, steel pods in its first phase, in addition to classrooms, restrooms, medical support areas and a central command center that overlooks the groups of pods.

For more than three years, the county has been challenged by overcrowding at the jail after House Bill 1006 went into effect Jan. 1, 2016. The bill requires counties to incarcerate Level 6 felons rather than send them to a state prison run by the Indiana Dept. of Corrections.

In 1993, the Hamilton County Jail was built to house 296 inmates. Today, it houses nearly 400. Thousands are processed through the facility each year.

“I was first elected as a county commissioner in 1989, and at that time, this correctional facility basically had one building on it, the old jail where the detectives are right now,” Hamilton County Commissioner Steve Dillinger said. “In 1993, we built the new jail, and then in 2008 we built on to that facility. In 1989, our population in Hamilton County was about 80,000 people. Now, we’re at 300,000-plus. You don’t have to be an Einstein to know it’s hard to keep up, not only with our infrastructure, but also with our correctional facilities.”

Since the latter half of 2015, the county has worked to rearrange inmates in existing facilities to ease crowding, resulting in the decision to move female inmates to the juvenile center and move juveniles back to their former facility in 2017.

“In 2006, we built the juvenile detention center,” Dillinger said. “We had spent a lot of time, effort and money researching what we should built, and we built it to facilitate a lot of juveniles and to help other counties put their juveniles here. Unfortunately, after we had that built, the laws changed, the judges changed, and all the sudden, we weren’t keeping juveniles in it.”

“We were kind of disillusioned with that, but it turned out to be a pretty good deal,” Dillinger said. “Now that the legislature makes us keep Level 6 felons in our facilities, you can understand how that would put a heck of a strain on jail.”

The expansion adds 120 beds in the section that will open July 8. The other section of the new building sits now as a shell for future expansion of approximately 130 more beds. 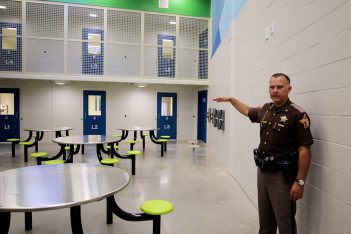 Sheriff Dennis Quakenbush shows the interior of a group inmate cells in the expansion of the Hamilton County Jail.

The expansion raises the adult capacity of the jail to 537, including the female inmate population. As of July 1, the inmate count was 405.

Sheriff Dennis Quakenbush said his No. 1 goal is to keep Hamilton County as safe as possible. He said he looks forward to expand opportunities to reduce recidivism.

“The expansion also allows us opportunities to provide pathways for reformation and restoration for our inmates,” he said. “I’m a strong believer in justice but also in mercy and compassion.”

Quakenbush said two new classrooms in the expansion allow for GED training and other workforce training classes that give inmates an opportunity to plan their lives after completing their sentences.

Quakenbush said he is proud of the county’s relatively low inmate population compared to its overall population.

“Hamilton County has seen explosive growth over the past 20 years, consistently rated in the top-growing communities in this nation,” he said. “Despite that, we’ve been able to maintain it as one of the safest as well. Even though we are the fourth-largest county (in the state), we are ranked No. 9 in state prisoners and 18 in the number of local prisoners.”