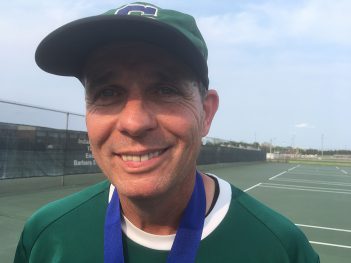 In one of the most dramatic state finals in recent years, the top-ranked Irish nipped No. 2 Park Tudor 3-2 June 1 at North Central to capture its second state title under Noe.

Cathedral junior Meg Coleman battled leg cramps to defeat Jule Schulte at No. 2 singles in a third set tiebreaker for the deciding point.

Cathedral sophomore Ellie Pittman, a Carmel resident, dropped just one game in her No. 1 singles match against Park Tudor’s Lauren Long to remain unbeaten headed into the state singles competition.

“I’m more mentally tough when there are a lot of people watching this year,” she said. “I’m more calm instead of letting it get under my skin. We were all determined to win this year because we were disappointed after losing last year.”

The Irish lost 3-2 to Carmel in the 2018 state title match. Cathedral turned the tables, beating No. 3 Carmel 3-2 in the morning semifinals.

Coleman provided the final point in that one as well, edging senior Apurva Manas 6-3, 4-6, 6-4 to send the Irish to the final.

Carmel got its two points with victories by the No. 1 doubles team of sophomore Leila Antony and freshman Lauren Littell and No. 2 duo sophomore Katelyn Conley and senior Selena Liu.

“We got beat pretty badly at singles (in first meeting),” Carmel first-year coach Bryan Hanan said. “I challenged them and they challenged themselves. We came out and played to win instead of just playing to be here. I just reminded them we won the past two state championships.  We’re not going to roll over for anyone, and they didn’t.”

The Greyhounds will return five starters.

“We had a very good JV team, right there that could be another varsity team,” Hanan said. “We’ve got a lot of competition (in the program). We’re going to work hard. Now we have something to strive for: win a state championship next year.”