Elizabeth Clark, a junior from Noblesville High School, has been named the 5th District winner of the 2019 Congressional Art Competition.

Clark was recognized May 13 during a special reception at Nickel Plate Arts by 5th District U.S. Rep. Susan W. Brooks for her drawing, “Aleah.” 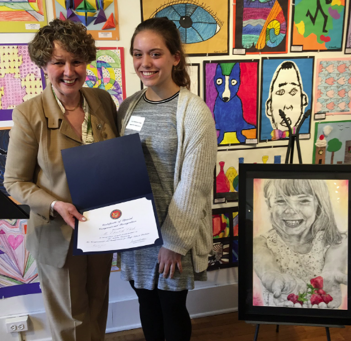 “Aleah” was selected by a team of local professional judges and will be displayed at the U.S. Capitol Building for the next year, along with winning entries from each congressional district in the nation.

In the 5th District, 33 students from 12 high schools entered the competition, making it the largest contest since its inception in 1982.

“Judges particularly noted Clark’s unique skill to capture the strong expression of Aleah’s face, drawing in any viewer for a closer look, as well as her ability to create the illusion of a three-dimensional figure on a flat surface,” Brooks said. “This nation-wide high school art competition is such a great opportunity to emphasize the importance of supporting the arts and to recognize the artistic talent of 5th District students. I look forward to sharing the drawing, ‘Aleah,’ with my colleagues in Congress and all Hoosiers who come to visit the U.S. Capitol.”

In addition, Brooks announced that the following pieces placed in the Congressional Art Competition that will hang in her district offices in Carmel and Anderson: