You are at:Home»Current in Zionsville»Zionsville Community»Zionsville Bike Challenge returns in May

Zionsville residents have six weeks to log as many hours or miles on a bike as they can in advance of the Zionsville Bike Challenge, which returns this month for the fifth consecutive year.

Riders can bike alone or as part of a team in four categories based on skill level. The family fun level for younger bikers requires 540 total biking minutes, averaging 90 minutes per week. The next three levels are based on miles, encouraging 200, 400 and 600 miles, total. 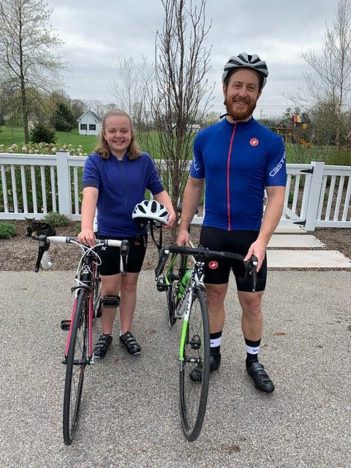 Brian Witzig has undertaken the challenge in the past and wants to encourage his 11-year-old daughter to join him this year.

“I think that would be something she would think is pretty cool,” the Zionsville resident said.
Last year, Witziz logged 400 miles during the six-week period, which he believes is his limit.

“I thought I could go for the 600 (miles), but that’s kind of a commitment,” he said.
Witzig enjoys the benefits of being active and participating in scheduled group rides for all skill levels.

“If you go through a club, everybody’s really serious, so it’s basically just a race,” he said. “With the (bike challenge) rides, nobody was trying to ride as fast as they could.”

Group rides also help bikers learn the connections of the many Zionsville trails, which is why Zionsville resident Jennifer Slapak wanted to participate.

“It was a good opportunity,” she said. “It’s not intimidating to go all the way up to the Rail Trail to see where it ends.”

Miles are logged and tracked electronically on an honor system. Those who complete the challenge win a T-shirt.