“I felt like he treated us as though we were college students and he took literature very seriously,” said Freedman, a Carmel resident. “I decided I wanted to go to college to be a poet.” 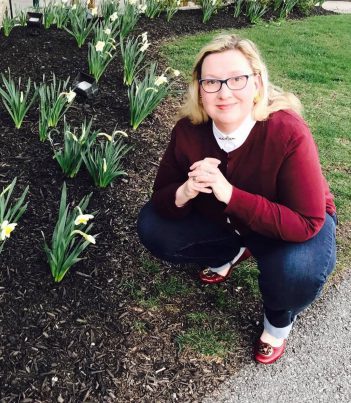 So, she attended Indiana University “be a poet.”

“The lady who was registering me for my classes literally laughed at me and told me I needed to pick something else,” Freedman said. “I called my brother, Tom, and he told me to pick nursing, so I started nursing school two days later. I also got a B.A. in creative writing and literature.”

During college, Freedman consistently wrote poetry but slowed down when she became a mom. Two years ago, with her children “mostly grown,” she started writing again. Now, one of her poems, “The Fifteen Piano Church,” which was published in the Tipton Poetry Journal, has been nominated for a Pushcart Prize. Published by Pushcart Press, it honors the best small-press poetry, short fiction and essays, etc., published the previous year.

“It was nominated right after my mother passed away, so to me it was a sign,” Freedman said. “For the last five years, I had spent all day Sundays visiting my mother. The nomination came to me as an indication that my mother would want me to spend more time focusing on my writing.”

The idea for “The Fifteen Piano Church” was inspired by one of Freedman’s patients who told her churches often take pianos as donations.

“And then on many occasions, they already have pianos but know it is important to families,” she said.

Freedman also knows how important poetry can be in her job as a palliative care nurse practitioner.

“Often, I will utilize the creativity of poetry to help with my patients. Recently, I had a breast cancer patient who stated she did not feel much like herself,” Freedman said. “I pulled up Maya Angelou reading ‘Still I Rise,’ to reinforce that the patient can keep moving forward even with the circumstances of her life.”

Freedman will know by the end of May if her poem was selected for a Pushcart Prize. Her first book of poems, “A Room Full of Good Intentions,” is set to be published in the next four to six months.