To begin her presentation, Crouch informed the crowd about Indiana being the nation’s leader in advanced manufacturing. She said the state has the second-best infrastructure and is the second most affordable state in the nation. 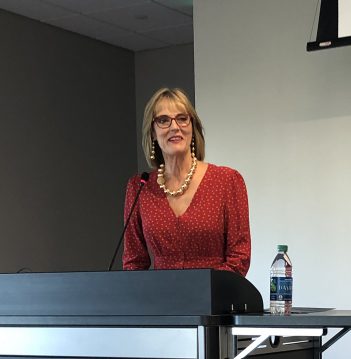 “These are incredible accomplishments, but they can’t be credited to government alone. Government may light a path, but it is the hardworking men and women who are taking the risks and making the sacrifices that has put our state on a path to prosperity,” Crouch said. “As we embark on Indiana’s third century, let’s focus on perfecting this special state in the heart land of our great country. We have started doing that with our Next Level Connections investment.”

“We know access to high quality, affordable internet affects workforce, healthcare, education, economic development and quality of life,” she said. “Last year, Purdue University released a study that found almost 500,000 Hoosiers are living in internet darkness. If all those Hoosiers were connected, it would result in an additional $1 billion in the state’s economy every single year.”

Other portions of the Next Level Connections investment would invest $90 million in creating a world-class network of trails and $20 million in providing more nonstop, international flights.

“Our goal is to have a trail within five miles of every Hoosier by 2020, we are investing $90 million in creating that world class network of trails here in Indiana,” Crouch said. “We know ground transportation isn’t the only way people and cargo move, so we are going to continue to invest to ensure our global marketplace. Through our Next Level Connections, we will increase our global connectivity like never before. We are investing $20 million dollars in more nonstop transatlantic flights.”