You are at:Home»Current in Fishers»Fishers Community»Harris back in form with Denver Nuggets after battling injuries

Despite his team’s success, this hasn’t been the easiest of seasons for Denver Nuggets guard Gary Harris.

“It’s been a tough season for Gary because of the injuries, the in and the out, but he’s a guy that you can see is finding his rhythm on both ends of the floor, and that’s a good thing for us,” Nuggets coach Michael Malone said.

Harris, the 2012 Mr. Basketball from Hamilton Southeastern High School, played in only one game in December 2018 due to a hip injury. Then, he missed much of February due to hamstring and groin injuries. 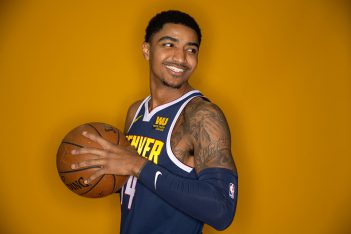 “We’ve been a top 10 defense the whole year and we had some slippage. It’s no coincidence that the slippage occurred when Paul Millsap and Gary Harris were out,” Malone said. “When you can get two of your better defensive players back in the lineup and get them healthy, your defense upticks once again. Gary is a guy that will guard smaller guys and bigger guys. He’s not afraid of the challenge. That’s why we in Denver feel he’s one of the better two-way players in the NBA.”

“I’m taking it one day at a time,” Harris said following a March 24 road loss against the Indiana Pacers. “My body is feeling great, so I just got to keep on going.”

Harris doesn’t want to dwell on the frustrations of the injuries,

“I’m just happy to be back out there and playing and doing whatever I can to help the team win,” Harris said. “The different injuries have been tough but you can’t control that. You just got to react. You’ve got to be able to bounce back.”

Harris played two seasons at Michigan State before declaring for the NBA Draft. He is in his fifth pro season. The Nuggets have clinched a playoff spot for the first time since the 2012-13 season.