You are at:Home»Current in Carmel»Carmel Community»Hamilton County Democratic Party asks election board to review bribery allegations in Republican mayoral race

The Hamilton County Democratic Party is asking the county election board to investigate allegations of bribery in the Republican primary race for Carmel mayor.

Joe Weingarten, chair of the Hamilton County Democratic Party, said he planned to deliver a letter March 28 to the Hamilton County Board of Elections asking for a review of allegations that representatives from one or both campaigns requested or offered $140,000 for candidate Fred Glynn not to run against incumbent Mayor Jim Brainard. 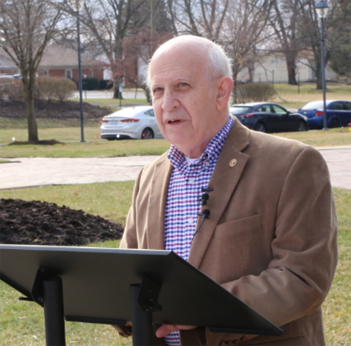 “We believe these reports warrant a full investigation into the conduct of the Brainard and Glynn campaigns,” Weingarten stated in the letter to the board. “We ask that you investigate these serious allegations immediately to ensure proper transparency and oversight.”

Representatives from both campaigns said they didn’t notify authorities about the alleged bribery and didn’t plan to contact them. Weingarten said at a March 28 press conference that it would have been the first step he would have taken if he suspected bribery.

“The Republican County chair was at the meeting, so we want her to come forward and say what really happened,” Weingarten said. “I know myself as a county chair if I heard about this, immediately following the meeting my next step would’ve been the county prosecutor’s office, because shady politics should not occur at any level.”

In response to Weingarten’s request for an investigation, Glynn called the actions of staff from Brainard’s campaign “concerning to all Hoosiers that call Carmel home.”

“However, these events don’t distract from the important issues in this race such as the mayor’s runaway spending, pay-to-play politics and voiding his Contract with Carmel,” Glynn said. “I am focused on sharing my message of new leadership, a new vision, and a new voice for Carmel.”

“Despite the accusations coming from the mayor’s political opponents, neither him or myself were in the meeting,” Sisko said. “Unfortunately this is politics at its worst, but fortunately Carmel’s voters are smart enough to see right through it.”

The county election board is comprised of a Democrat, Republican and elected county clerk. Despite Hamilton County historically leaning heavily Republican, Weingarten believes the board won’t favor one party over another if it agrees to investigate.

“They’re fair about going through and digging out the information,” Weingarten said, adding that they can turn the information over to the county prosecutor if the case is strong enough. He said he hopes an independent prosecutor would be assigned to review the matter if that happens.

No Democrats filed to run for mayor in the May 7 primary, but Weingarten indicated the party may appoint someone to run against the prevailing Republican.

The bribery allegations stem from a Feb. 3 meeting between Glynn’s former campaign manager, Dan Hennessey, Brainard campaign volunteer Allan Sutherlin and Hamilton County Republican Party Chair Laura Campbell. Glynn had not yet filed for office, and Sutherlin and Campbell said they wanted to present polling data to Glynn’s campaign that showed he faced an uphill battle.

Hennessey declined to comment and referred all questions to Brainard’s campaign manager.