Graci Graves fondly recalls getting piggyback rides from her cousin.

Graves was just 4 years old when her cousin, Kent Ribordy, a Valparaiso resident, died from leukemia at age 16 in 2007. Now a Carmel High School sophomore, Graves ran for the Leukemia & Lymphoma Society’s Indianapolis Student of Year in honor of her late cousin. 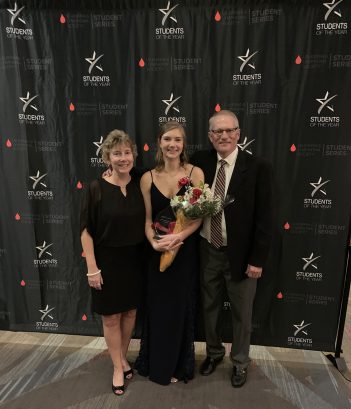 Graves earned the title by raising the most money — $111,172 of the $735,364 total collected — in the seven-week period, which ended March 16 at a Grand Finale Gala in Indianapolis. Ten of the 23 Indianapolis Student of the Year candidates were from CHS.

“I basically just went around to ask people for donations and my parents’ friends,” said Graves, who was assisted by three other students and seven adults. “I would go to companies for sponsorships and have meetings with them.”

She had previously gained experience by working in her neighbor Reagan Markland’s Student of the Year campaign in 2018.

Graves had some restaurant events where businesses donated a percentage for the night. There was a purse bingo at Urban Vines Winery & Brewery in Westfield.

“We did a lot of events that were a lot of fun, and getting to know the other candidates at the Grand Finale night was a lot of fun, too,” Graves said.

Graves said she can be a mentor for future Student of the Year candidates.

In keeping with her philanthropic nature, Graves is a club member of Project Sunshine at CHS.

“At club meetings, we put together craft kits for kids in hospitals,” she said.