You are at:Home»Current in Zionsville»Zionsville Cover Stories»Learning a language: ZCHS teacher to use $12,000 grant to improve French and Spanish skills, learn Arabic

Amy Conrad is a French language teacher at Zionsville Community High School who also speaks Spanish. Now, she plans to strengthen her skills in French and Spanish and learn a third language — Arabic — by using a $12,000 Teacher Creativity Fellowship Program Lily Endowment grant to travel to Paris, Morocco and Spain this summer.

The Teacher Creativity Fellowship Program allows teachers to renew their commitment to teaching by allowing them to pursue their dreams and passions.

“A lot of (the trip) is based around the idea of language learning,” Conrad said. “The first language I learned other than English was French, so I’m going to start out spending several days in Paris, and then I’m going to be going to Morocco, where I’ll be going to an Arabic school for five weeks to study modern-standard Arabic and Moroccan Arabic. That will be my new language.

“Then, after that, I’m going for a couple of weeks to Spain and doing some travel throughout southern Spain.”

Conrad began learning Spanish in 2016 when she did field work for a local education certificate program in Nicaragua. Knowing she was going to be living with a host family, she traveled there early to attend a Spanish school to study the language. 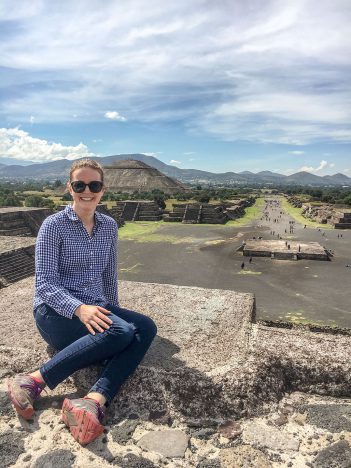 Conrad said as a language teacher, it is possible to fall into the mindset of not knowing why a student wasn’t learning part of a new language. Learning Spanish gave her a firsthand experience of what it was like to be a student learning a new language.

“It was personally satisfying to learn Spanish, but it was like reliving the experience my students had,” she said. “It was like that very firsthand experience, like, just because you heard the word two minutes ago, you forget immediately and it’s natural and normal. It was really eye-opening to relive that experience of language learning again, so I kept pursuing it.”

After her trip to Nicaragua, Conrad began working with a Spanish tutor and traveled to Mexico in 2018 to study more of the language. She hesistates to refer to herself as fluent.

“Fluent is a weird word,” she said. “I can read a book or a newspaper or I can watch a show. I can make myself be understood, just with a lot of mistakes, usually. I have really focused on learning Spanish. I don’t know if I will ever teach Spanish or not, but I would love to pass the licensing exam in Spanish.”

By traveling to France, Morocco and Spain, Conrad also will see the influence culture has on language.

“My big focus in each country, too, is finding ways different cultures and language overlap,” she said. “There’s a lot of influence of Arabic-speaking cultures there. You see it in a lot of the sites that may have been a mosque and turned into a cathedral. There’s so much overlap.”

Although Arabic is Morocco’s official language, Spanish and French each have influence in the northwest African nation.

In Mororocco’s capital city of Rabat, Conrad will be studying at Qalam wa Lawh Center for Arabic Studies. The school is often a destination for students who wish to travel abroad or participate in a language-learning program.

“I advise students and parents on some options and opportunities for things like study abroad and travel abroad, and I think it’s usually really reassuring to say, ‘Yes, this is a respected program, but I’ve studied at this school, I know the experience they are going to have,’” Conrad said. “I always want to be making as strong of a recommendation I can to students.”

Although separate languages, French, Spanish and English have the same alphabet. The Arabic alphabent, however, is dramatically different. That has made learning the language a special challenge for Zionsville Community High School French teacher Amy Conrad, who also speaks Spanish. 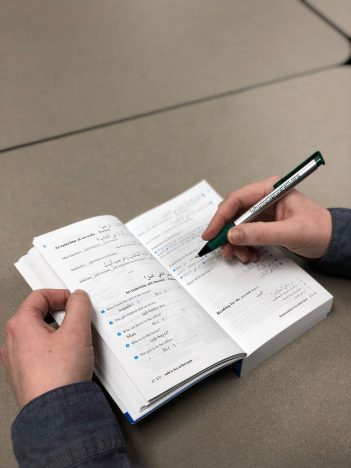 “It’s been a learning process, the Arabic alphabet,” she said.

In addition to having completely different letters, Arabic also is written in the opposite direction than the languages she speaks.

“I think it’s going to take time, and Arabic is just a language that is more different from English than French or Spanish are, so I have to be reasonable and expect I will learn it much more slowly,” Conrad said.

Despite the challenges, Conrad loves learning the new language. Being able to communicate with someone in their native language allows for a new perspective.

“It’s easy to make assumptions about what somebody thinks, and you get to assume that because they can’t tell you any differently because you can’t understand them,” Conrad said. “If they can tell you what they think in the language they’re most comfortable in, it’s such an interesting experience to get that perspective.”