Chess is a game many adults never master. However, it comes naturally to 9-year-old Carmel resident Grant Mu, who recently won first place at the Scholastic Chess of Indiana competition in the eighth-grade and younger category.

The competition took more than 10 hours.

“It was really fun, but I was pretty tired by the end,” Mu said. 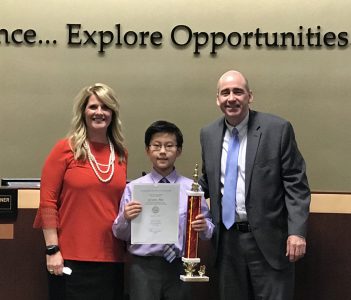 “I’m used to playing chess against kids that are older than me, so that didn’t make me nervous,” Mu said.

Mu also received a trophy and a $1,000 scholarship. He advances to the Barbar National Tournament Aug. 3-6 in Orlando.

“I feel good. It’s exciting, but I’m pretty nervous for the tournament in Orlando,” he said.

“When I was 4 my dad taught me the simple things like the chess moves,” Mu said. “Then, when I was 5, my dad and mom took me to some scholastic chess tournaments. When I began, it wasn’t very formal. For the last one to two years, it’s been pretty formal tournaments.”

For Mu, chess has a theraputic effect.

“I like to play chess because it’s calming and relaxing,” Mu said.

“We feel very proud of his accomplishments in chess,” said Fang Gong, Mu’s mother. “He loves chess and chess has also taught him many things that he wouldn’t have learned otherwise. We hope that chess could become Grant’s lifetime hobby that is both fun and meaningful.”

Mu plans to continue competing in chess tournaments as long as he’s able.

“If I get too busy with school I will just play it for fun or for a hobby,” he said.