After all, her father, Eric Clark, was the head coach. 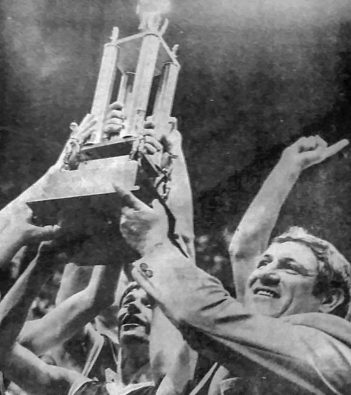 Carmel High School basketball coach Eric Clark holds up the trophy after the team won the title in 1977. (Submitted photo)

Gangstad, who was a teacher at Woodbrook Elementary that year, will present “Carmel’s Own March Madness: IHSAA State Champions 1977” in the Carmel Clay Public Library’s Program Room at 7 p.m. March 27. Admission is free for the video presentation, which will include a pep session and highlights of the state title game.

The Greyhounds nipped East Chicago Washington 53-52 in the championship game of what was then a one-class system. Mark Herrmann and Bart Burrell each scored 16 points for Carmel in the final. Washington star Drake Morris missed a shot at the buzzer. Herrmann scored 22 as CHS beat Columbus East 71-60 in the semifinals earlier in the day.

Herrmann and Burrell are best known for their football careers at Purdue. Herrmann was a quarterback and Burrell was his favorite receiver. Herrmann went on to play 12 seasons in the NFL.

“When they won, they went to every elementary school and showed the trophy,” Gangstad said. “They brought little pieces of the net to share with the kids.”

The championship seemed improbable after a rough start.

“They had a rocky season,” Gangstad said. “They started off ranked highly, but so many of the guys were football players. They all had their football legs. They lost two of the first three games. We eventually lost seven games, including a 19-point loss in the last game of the regular season to Ben Davis.”

Her father never gave up hope.

Others weren’t so sure and thought Clark should stop saying his team could win it all.

“They played their hearts out,” Clark said. “They were a very good team.”

Gangstad rode home on the team bus with her parents after the state title game, which was played at the now-demolished Market Square Arena in Indianapolis.

“When we turned into Carmel, the streets were packed with people,” Gangstad said.

There were more than 5,000 people crammed into the gym to greet the team, she said.

“There was hardly room for us to get in,” Gangstad said.